October 04, 2011 by Brandon Vogt
"Like" the Patheos Catholic Page on Facebook to receive today's best commentary on Catholic issues. 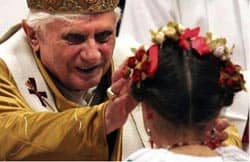 A recent article in the Catholic Herald revealed two vastly different pictures of young Catholics. On one hand, it explained, many young people are strongly drawn to the Church—and Pope Benedict XVI in particular. Those in doubt need to look no further than the recent World Youth Day where almost two million youth gathered in Spain to worship alongside the Pope.

On the other hand, the article points to one place where this connection is much weaker—the Internet. Consider the official website for the Bishops Conference of England and Wales, where young visitors last month were greeted with a gigantic banner promoting National Youth Sunday. "That's great!" you say, "What a fantastic way to draw young people in! What's the problem with that?"

The banner was for National Youth Sunday 2009.

For a generation raised on Twitter and Facebook, where "up-to-date" is slow and "up-to-the-second" is the norm, the Bishops' site is not only out of date—it's irrelevant. When young people see content that has been stagnant for two years, it shapes their impression of the group behind it.

Though the Bishop's site is just one example of online ineffectiveness, it's definitely not the only one.Whether through fear, ambivalence, or ineptitude, most of the Catholic Church has been slow to adopt new media and use it well, which is strange when you observe her innovative use of media in the past.

The Church has traditionally been quick to embrace new technology. When it came to print, radio, television, and even the early forms of the Internet, she was a forerunner. But with modern new media, she's been uncharacteristically slow to adapt.

Yet it doesn't have to be that way. With all of her resources, depth, intelligence, and experience, the Church can quickly expand through the digital world and thereby connect with the young digital natives who populate it.

However, if the Church wants to use new media to reach young people, she needs to master three things—digital aesthetics, daring intelligence, and intentional dialogue.

First, digital aesthetics. An old adage encourages us "never to judge a book by its cover." Yet we all do it. The look of something—that visual first impression—indelibly suggests its eventual quality.

This dynamic is at play all across the web. When young people visit websites that are unattractive, out-of-date, or sloppily put together they turn elsewhere, just as they would if they saw an ugly, old, dilapidated house when searching for a home.

Parishes typically spend many hours caring for the parish grounds and buildings. They tend the gardens, paint the sanctuary, and make sure their signs are accurate and helpful. Why? Because they know that if a visitor drives up and sees a dilapidated church and unkempt grounds, they may not come back—or even enter in the first place.

We Catholics need to pay the same careful attention to our online presence. We must make sure our websites are as attractive as our churches. We need to retrieve the artistic heritage of Michelangelo, Raphael, Bernini, and Dante, that has attracted people to the Church for centuries.

That doesn't mean we need to plaster our websites with frescoes and mosaics. But it does mean that our websites should reflect the beauty and order at the heart of our Faith. All the colors, graphics, structure, and content on our sites should draw people in, just as the great cathedrals do, ultimately lifting their souls to higher things.

Second, daring intelligence. Many assume that young people desire shallow, simple, palatable presentations of the faith, so we refrain from challenging them. This is especially true online, where most sites shy away from more serious-minded engagement. But for many young people, this is the wrong approach.

Fr. Robert Barron, a priest in the Archdiocese of Chicago, shares a story about visiting his high-school niece. When he got to her house, he saw a stack of her school books. On top was Shakespeare's Hamlet—not Cliffnote's Hamlet, but the real thing. Beneath that was Virgil's Aeneid—and not just a translation but the full original Latin text. Underneath that was a Physics textbook, bristling with complexity and challenging equations.