The Darkness on the Edge of Town: American History and Religion as Horror 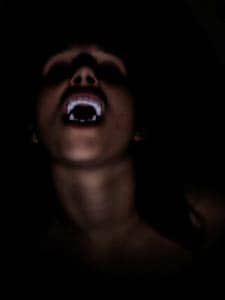 The original Texas Chainsaw Massacre ranks as holy iconography for most horror nerds, myself included.

Have you seen it? If not, it may be because it would be the very last thing you would want to watch, or admit to watching. You are probably picturing an exploitative bloodbath. A disturbing and sick (in the old usage of the term) combination of teenage pulchritude and screaming logging equipment turned weapon of mass destruction. I bet you are imagining blood spattered everywhere to the delight of the socially degenerate.

You would be wrong.

There is surprisingly little gore in Texas Chainsaw Massacre. This is in fact true of much of the early slasher genre (in Halloween, 1978, there is not one drop). And yet this is a deeply disturbing film, one of the most unsettling you'll ever watch. The deeply twisted Sawyer family and their house of horror in rural Texas will reappear in your dreams. You may never forget Leatherface swinging the chainsaw over his head in rage, frustration, and, inexplicably, some kind of totemistic and elemental dance of twisted joy.

Director Tobe Hooper, in a somewhat recent interview, was asked what exactly his savage fairy-tale was all about. His response: "It's about America man, it's about America."

American history is a horror story. As a scholar of religion and culture, I study monsters because they offer a guide to hidden histories, a map to where the bodies are buried, a way to hear the secrets told in dark corners. The past is the bone yard we've built our world on top of. It's the haunt of the dead who have been ground down by manifest destinies, cowboy entrepreneurialism, and the nostrums of progress.

I believe in monsters. I'm no Fortean or ghosthunter, but I dislike the language of symbol and metaphor when talking about our creatures of the night. Monsters are powerful social constructions that exist at the heart of American class conflict, religious controversy, gender anxieties, and imperial ambitions.

The early Puritans forged their religious experience in tandem with their beliefs about the monstrous Other-Quakers, witches, and Native peoples. Dissenters throughout the young colonies met the Devil on their road to conversion. At the time of the American Revolution, serious debates raged over whether fossil finds gave evidence of fallen angels or unknown animals. Religion created a whole world of monsters.

In more recent times, the Vampire, a monster born of religious terror, has obsessed and seduced us. Bizarrely, the blood hunger of this creature made its way into the discourse of Anita Bryant, Jerry Falwell, and other leaders in the early religious right, a rhetoric of horror they directed against the gay, lesbian, and transgender community they hated and fear. AIDS provided a way for them to describe their cultural enemies as voracious monsters spreading infection. The religious right found a language of darkness they loved . . . and exploited.

Currently, the zombie apocalypse has become a kind of gallows humor, borrowing themes from the pop apocalyptic of the last forty years (thanks, Hal Lindsey). It's a genre that attempts to subvert the apocalyptic in certain ways, by putting the emphasis on the survivors and their efforts to build community. It's still hard to argue that its popularity is not based in part on decades of warnings about the late great planet earth and getting left behind.

Not to mention our ongoing obsession with religious horror. Important aesthetic documents like Rosemary's Baby and The Exorcist have been major cultural phenomena, borrowing themes from the dark side of the American religious consciousness. Sometimes, as in Polanski's work, it has been satirical. In Friedkin's Exorcist, although a wonderful (and truly frightening) film, there's just the hint of religious propaganda, the discomfort of traditionalism with modernity. Indeed, the film is in part a story about the failure of modernity to deal with the demons that lurk in our psyche.

The religious horror genre hasn't disappeared. A whole genre of apocalyptic films that appeared in the '90s and, today, we see a renewed obsession with the possession narrative. These tales are often based on a very literal, one could almost say fundamentalist, understanding of the power of the Evil One. In fact, the "Prayer to Saint Michael," a well-loved favorite of traditionalist Catholicism, appeared as a DVD extra on Eli Roth's The Last Exorcism. It is presented as "a protection prayer" one might want to use while watching the film.