Finding "The Way" Far from Hollywood

October 06, 2011 by Rebecca Cusey
"Like" the Patheos Evangelical Page on Facebook to receive today's best commentary on Evangelical issues. 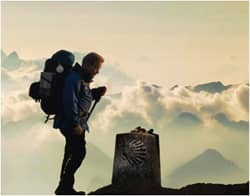 Martin Sheen and Emilio Estevez brimmed with excitement as I met them in a swanky Georgetown hotel to discuss their passion project, the new movie "The Way." Written by Estevez and starring Sheen, the film tells the story of a lapsed Catholic, Tom (Sheen), who walks an ancient pilgrimage route through France and Spain after the sudden accidental death of his son (Estevez). As he meets up with other modern day pilgrims along the Camino de Santiago, they form a small community of faith. The only thing the band of pilgrims has in common is a deep inner need and a lack of clarity on why they took on such a seemingly outdated task.

Sheen and Estevez, who is Sheen's son, were joined by David Alexanian, a producer of the film. With solid laughter and good hospitality, Martin Sheen played host, genially asking me if he could bring me a soda and lounging comfortably on the suite's sofa while Estevez spoke softly and passionately. Clearly both men feel strongly about this project, about working together, and about the love they share for film and deeper questions of faith. Fortunately, I loved the film as well and was moved by its quiet focus on faith. I highly recommend it.

Here is our conversation about filmmaking, faith, and the power of family.

You've been doing a bus tour with this movie. Have you been doing Q&A's?

Estevez: Every screening. Sometimes twice a day. Sometimes secular and faith based, the reactions at the screenings are the same. I would say 60% of the Q&A's are people just standing up and sometimes giving witness or testimonial.

Sheen: And thanking us.

Estevez: And thanking us for making the film. How often does that happen? Lots of times actors or directors will make a film and then spend the next couple of months hiding.

Sheen: [deep booming laugh] When someone is enthusiastic and proud about what they've done, you don't have to urge them to brag about it.

When I was looking you guys up, I saw that your father, your grandfather is from Galicia. Is there a connection?

Sheen: Yeah. Amazing. The cycle has been completed in a sense. It started as my father, his [Estevez's] grandfather, coming first to Cuba and then to the United States. And then I of course grew up here. And then his [Estevez's] son, my grandson, going back to Spain and meeting his wife and living there.

Estevez: He [Sheen] went over there in 2003 on a fact-finding mission. Wanted to see the Camino and the cathedral. My son was working as his assistant on The West Wing, he was 19, they went over.

Sheen: We actually drove the Camino. I had this fantasy of doing it. I didn't have enough time or information.

Estevez: No backpack. No walking stick, no shoes. Woefully unprepared. My son met this gal at what's called a casa mural, like a bed and breakfast. That night at the pilgrim's supper, the innkeeper's daughter came in the room and it was like [gasps] Love. Fireworks. As he describes it.

Estevez: He came home and said, "I'm moving to Spain, Pop." I was like, "What? What?" So I had to figure out a way to work there if I wanted to spend time with him. And his [Sheen's] insistence that I write something for him was a way to continue that conversation.

Sheen: They would not approve anybody filming in the cathedral.

But then you did get in?

Sheen: It's another miracle. He [Estevez] ordered the crew to begin praying and lighting candles.

Estevez: Anything. I was desperate. David was running around town, doing what he had to do, offering up his firstborn, his first three.

Pilgrimage, though. Here you have this full circle family story and yet you chose to make it about pilgrimage. I connected because I've been on pilgrimage [to Jerusalem]. I had this experience of "Why am I here?"

Estevez: Aren't we all pilgrims? If we didn't come over on the Mayflower, we came from somewhere else.