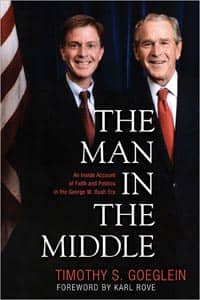 Timothy Goeglein served from 2001 to 2008 as Special Assistant to the President and Deputy Director of the White House Office of Public Liaison, where his role was to connect the Bush White House with leading conservatives and Christian conservatives. Now an advocate for Focus on the Family in Washington D.C., Goeglein spoke with Patheos' Timothy Dalrymple about his extraordinary account of his White House years, The Man in the Middle.

As Ralph Reed recently noted, even in the midst of an economic crisis, religious issues have been front-and-center this election season. Not only the perennial issues like abortion and gay marriage, but issues like "submission" and "dominionism" and Mormonism, are very much in the air. I want to help evangelicals think through what they should seek in a candidate for the presidency. You've been on the inside. What do you think evangelicals should look for, religiously and spiritually, in a candidate for the presidency?

As I say in The Man in the Middle, I worked for three of the most well known evangelicals of the last twenty years. For Dan Coats, as his deputy press secretary and then as his press secretary and communications manager; for Gary Bauer, during his presidential campaign; and of course for nearly eight years for George W. Bush. I have profound respect for each.

The thing that I love about George W. Bush, and what attracted me to him in the first place, was that I came to see that he was—and remains to this day—an evangelical with a Catholic sensibility. That undergirded his presidency from the beginning to the end, and it made him very different from any other president in the contemporary era.

I touch on this in a long chapter on the President's friendship with Pope John Paul II. George W. Bush held together his strong commitment as an evangelical Christian with a profound respect for and understanding of the remarkable Catholic intellectual tradition, which encompasses public policy and contemporary politics. He found a commonality with Catholics in domestic issues, where he was the most pro-life, pro-marriage, pro-religious-liberty president in the contemporary era.

This is not unrelated to the fact that President Bush had a very profound experience of mercy and redemption in his own life when he was nearly 40 years old regarding his faith. It informed and shaped not only the domestic and foreign policies of the Bush administration, but also the way in which he related to people, from heads of state to the most junior staffer. His faith underscored and defined who he was.

So, to go to the premise of your question, I believe very strongly that this relationship between faith and politics in the United States is almost impossible to understand unless we appreciate that ours is, in Michael Novak's words, a religious republic. George W. Bush understood that on a deep and intuitive level. In my book, The Man in the Middle, it provides a very strong part of the narrative in which I came to understand and appreciate and love President Bush.

What do you mean when you say that George W. Bush had a Catholic sensibility?

George W. Bush made it a point of his domestic and his foreign policy to project the idea and make it crystal clear that justice is one of the most important, perhaps the most important, purpose of government. This was true as a two-term-elected governor of Texas, and it was true during all eight years of the Bush administration. Justice was at the center. It was at the center of foreign and security policy, even on controversial issues, but it was also true in the domestic arena. Justice was at the core, for instance, of the President's decision-making process in the stem cell debate.

In The Man in the Middle, I devote a whole chapter to the stem cell issue. I frame it as a debate in the West Wing and the Oval Office that was centered in justice. Yet—and this is important for history to understand—as the President made this very consequential decision, he reached out deliberately to people with widely divergent views, many of them from different faith traditions, because he wanted to hear many different views before he made that decision.