Letter to our Christian Friends, Present and Past

Hearing the sound of the Shofar, Jews rouse themselves to look at their blemishes and imperfections. Please excuse us if some of our newly freed-up vigor spills over, and we become more demanding of others as well. What we would like to see can't be a bad thing, can it? The world could use a bit more Christian outrage, quite apart from coming to the aid of Jewish friends. Yusuf Naderkhani, awaiting execution in Iran for the crime of converting to Christianity, could use a good deal more expressed Christian outrage. So could millions of persecuted Assyrian Christians in Iraq, as well as Copts in Egypt, mowed down in the streets by armored vehicles pursuing them like rats. Muslims fighting for their freedom in Syria (where 2900 have already been killed this year by their government) could benefit from some too, we would think.

Sometimes, when you don't hear the cries of people outside your community, you become a little more insensitive to the pain of those inside of it. 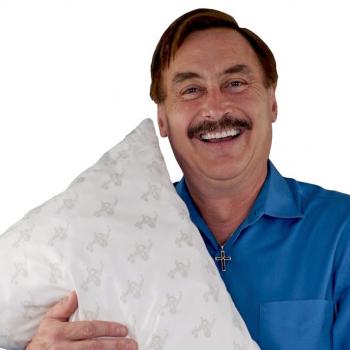 Lindell Needs a Shrink's Couch, Not a Pillow
Kermit Zarley
4

Speaking With Someone Who Is Going to Disagree
C. Don Jones
Get Patheos Newsletters
Get the latest from Patheos by signing up for our newsletters. Try our 3 most popular, or select from our huge collection of unique and thought-provoking newsletters.
From time to time you will also receive Special Offers from our partners that help us make this content free for you. You can opt out of these offers at any time.
see our full list of newsletters
Editor's picks See all columnists