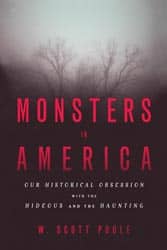 Monsters in America
Our Historical Obsession with the Hideous and Haunting
By W. Scott Poole

A Little History of Horror

The Latin word monstrum provides us with our English term monster. Monstrum is "that which appears" or reveals itself (the English word "demonstrate" is rooted in monstrum). Monstrum also has a relationship to the Latin word monere, meaning "to warn" and relates to the concept of an omen or a portent. But in world mythology and religious experience, the monster has done more than represent the hideous and abnormal. Monsters have been, from ancient times, invested with meanings divine and demonic, theological or fearfully natural. In every society they appear as multifaceted beings composed of a complicated tangle of symbolic synapses, living messages to those unlucky souls to whom they appear.1

Like Dracula leaving his Transylvanian homeland to seek new conquests in the teeming metropolis of London, monsters made their journey to the New World from a European context. Indeed, almost all of the monstrous forms that delight and terrify modern America have a longer, intercultural genealogy, sometimes reaching back to the origins of human society.

Humanity emerged from the Stone Age dreaming of monsters. The caves of southern France and northern Spain are covered with figures in red ocher, iconographies of the hunt, of blood and death. Human beings represented themselves not only as hunters, but also as prey and victims to the great beasts of the Neolithic world. At least one image, found at Trois Freres in the Pyrenees, presents a human figure, often referred to by historians as a "sorcerer." He is a shapeshifter, imagined by these early artists as a being part wolf and part bear. In other words, a monster.2

In the Bronze Age, religious epic and theological speculation about the cosmos helped shape the concept of the monstrous. Monsters, while certainly transgressive and terrifying, play an ironic role in most religious system's notions of order. Many Near Eastern and ancient Indian cosmologies imagine the slaying of a monster as central to the construction of the universe. In many of these mythologies, the body and bones of the slain monster are transformed into the architecture of the cosmos.

Monsters even figure into the biblical epic. The Hebrew experience of God drew heavily on its polytheistic antecedents and from the mythic material of its context. Monotheism, and its connection to the idea of the Covenant ("One God has chosen one people"), represented a living experience of God's action in history rather than a philosophical sentiment about the nature of reality. Only much later did it become a theological problem for the ancient Hebrews that monsters shared the same conceptual turf as Yahweh.3

Monsters, angels, ghosts, witches, and giants all appear in the Hebrew scripture. The meaning of these beings tends to be obscure and, in fact, contradictory. Both the land creature, Behemoth, and the giant sea monster, Leviathan, make an appearance in the Book of Job and in the Psalms, beings at once monstrous and miraculous. Religious Studies scholar Timothy Beal notes that both beasts appear in Hebrew scripture "in a variety of mutually exclusive ways." The Leviathan of the Hebrew Bible appears as both the enemy of Yahweh and Yahweh's playmate. In both Psalm 74 and in the third chapter of Job, Leviathan acts as the enemy of God, a terrible serpent that must be destroyed so that both creation and God's covenant people can be preserved. On the other hand, Leviathan in Psalm 104 and Job 40 appears as God's own creation, a being with a strangely close relationship to the Deity.4

Stephen Asma, author of a recent meditation on the nature of the monster, suggests that these competing biblical images reflect a complex conception of God emerging in Hebrew thought. Leviathan represents, in Asma's mind, the effort to reconcile the seemingly contradictory nature of God, a being who elicits both wonder and horror. Timothy Beal, in a close and brilliant reading of the Book of Job, argues that God describes Leviathan in detail to his unlucky servant because this creature provides, not a "spectacle" of "God's well- ordered world ecology" but instead an image of the "awful chaos that churns just beneath the surface." Both Beal and Asma see religious experience as a kind of horror movie, embodiments of the divine that evoke feelings of terror. The monsters of the Bible are symbols of that horror.5

Clashing images of God's monsters reveal both the slow development of ancient concepts of monotheism and the tendency of every human society to hold a deep fascination with the marginalized monstrous, the being that does not exactly fit in the cosmological order and yet is in some sense crucial to it. The horror of the monster goes hand in hand with its attraction. It has always embodied terror, raising questions about its own existence even as it terrifies.