October 03, 2011 by Pat McNamara
"Like" the Patheos Catholic Page on Facebook to receive today's best commentary on Catholic issues. 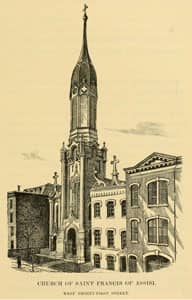 St. Francis of Assisi Church on West 31st Street in Manhattan sits right in the heart of the city, across from Penn Station and Madison Square Garden. For decades, it's been one of New York's most dynamic parishes. And it shows no sign of slowing down anytime soon. In the wake of September 11, 2001, St. Francis was a rallying point for the nation as it celebrated the life and ministry of Father Mychal Judge, O.F.M., who was long associated with the parish.

Urban ministry has been part of the Franciscan tradition from the start, and this Manhattan parish is one of the order's great success stories. In a neighborhood undergoing constant remake, the parish has been one of the rare constants. In what is now a business district with very few residents, St. Francis provides an amazing variety of ministries to workers, travelers, visitors, and most of all the poor.

Its history begins in early 1844, when Father Zachary Kunz, a Hungarian Franciscan, purchased a lot of land at West 31st Street between 6th and 7th Avenues. The neighborhood, then known as Bloomingdale, was mainly German. That summer a cornerstone for the church was laid and, the parish history notes, "a modest but solid little church was erected." The homily at the dedication Mass was in German. A parish school was soon established, and in 1866 German Franciscan nuns took charge.

The Catholic historian John Gilmary Shea, writing in 1878, described the parish's early history as one of "struggle and poverty." Although the parish was mainly German at the start, soon English-speaking Catholics came there. Some of the first pastors were not Franciscans, but diocesan priests from Germany, and it wasn't until the Civil War that the parish was officially deemed a Franciscan ministry. According to one history, it was under Father Andrew Pfeiffer, O.F.M., that the church "became really Franciscan."

Soon, however, this neighborhood would cease to be a neighborhood, but a business center for the growing metropolis. Shea comments:

It was well indeed in our great commercial city, where men are so carried away by the insane desire for wealth that they lose religion, honor, and honesty, to have proposed as a model one who, in an age when trade seemed to absorb all minds, renounced the wealth of his father, a merchant prince of his day, and all the flattering future before him, to become poor and humble for Christ's sake.

"The congregation," he noted, "is not by any means a large one, nor does it number many on whom Providence has showered wealth." The present church building was erected in 1892, with four new bells (named Immaculate, St. Francis, St. Clare, and Angelus Domini.)

By the turn of the century, as the neighborhood was mainly a business district, the number of parishioners declined. But the "little church among the skyscrapers" expanded its ministries. In March 1904, Father Eusebius Schlingmann, O.F.M., the pastor, introduced what became known as the "Nightworkers' Mass," which was celebrated at two A.M. Three years later, the parish introduced a noon Mass (the first in America) for people working in the area.

St. Francis of Assisi Church became a pioneer in urban ministry. It introduced the notion of the "service church," with its ministry to workers, shoppers and commuters. During the 1920's, Father Anselm Kennedy, O.F.M., instituted the practice of hearing confessions throughout the day. This practice still continues, and is one of the parish's most significant ministries. During the 1930's, regular visitors to the confessional included Thomas Merton and Dorothy Day.

In September 1930, at the start of the Great Depression, Brother Gabriel Mehler, O.F.M., began the St. Francis Breadline to feed the urban poor. Eighty years later, it's the oldest continually-running breadline in the country, daily feeding nearly three hundred people. Father Michael Carnevale, O.F.M., the breadline's current director, says of this ministry: "It is our responsibility as Franciscans to respond to God's poor and needy."

In 1959, the New York Times referred to St. Francis as "one of the world's busiest Roman Catholic churches." This is truer than ever. Although the parish school closed years ago, adult education courses attract people citywide. Nine daily Masses are well attended, and the confessional always has a line. There are numerous support groups, and successful ministries to Asian Catholics.

The Franciscan motto is Pax et Bonum, "peace and good." Over eight hundred years ago, Francesco di Bernardone walked the streets of Assisi singing God's praises and performing works of mercy. Today his friars provide a spiritual haven in a city where life and work can be overwhelming. In a place where it's very easy to get caught up in the craziness, they offer New Yorkers God's peace and perform numerous works of good.