Tell Me Something About Buddhism: An Excerpt 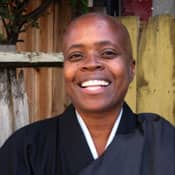 Introduction: What is Buddhism?

I hope you are well today. As I continue to follow the path, I encounter many people who have never been introduced to the teachings of Buddha and who become curious about Buddhist practice. There is even more curiosity when they see that my skin is black and that I clearly have African ancestry. Many have asked, "How did you come to an ancient Asian practice, such as Buddhism, as an African American person?"

First, it is important to say there is no country called Asia and that the terms Asia and Asian encompass many Eastern countries and many diverse people from those countries. That being said, I can clearly say that Buddha's teachings came from the ancient dirt of India all the way to my doorstep in contemporary California USA. Specifically, what brought me to the path of Buddha is the same thing that brings many folks to any spiritual practice: suffering and needing a place to heal.

On the other hand, I did not choose Buddha's path as much as I had been chosen by it. At first, I didn't see myself as practicing Buddhism or anything else from India, China, or Japan. To say out loud that I was practicing Buddhism felt like separating myself from my Christian upbringing and from other black people. In the beginning, I just had this secret: I was doing something different.

I didn't go out of the way to find Buddha's path. His teachings met me at the door of my own suffering. And when they came knocking over twenty years ago, I actually ran the other way. I was afraid of something so new and different from the black church I was raised in or the Yoruba African religion that I had been called to in my younger days. I told the Buddhist teachers that I did not have any room in my life for chanting, sitting down after work, or altars that were Japanese.

Still, the teachers didn't go away, bringing me candles, special Japanese incense that I had never seen before, and books to read. I had met my match. They were more stubborn than I could ever imagine. But it wasn't their persistence that kept me still long enough to invite the teachings in. I never sent the teachers away because I recognized the innate kindness and compassion in the words of Buddha that they shared. I recognized the teachings about compassion and wisdom as something I had been yearning to hear. I was dying inside, so to speak, and found vitality in chanting and meditation. Then I heard the voice of God, the love that God represents, in the teachings of Buddha. I was hooked.

Once, my youngest sister asked, "What does Buddhism have to do with black people?"

Although Shakyamuni Buddha's teachings came from the earth of ancient India, I knew, in the moment my sister asked the question, that the teachings had everything to do with me and with every other suffering living being. Of course, she wanted to know how did I come to such a strange journey, when she knew me as a devout Christian, a courageous warrior of the black civil rights movement, and a dedicated Pan-Africanist. She knew me with my Afro hairdo, African headwraps, and African jewelry. She knew the sister who read aloud poetry by black poets such as Langston Hughes, Nikki Giovanni, the Last Poets, Margaret Walker, and Gwendolyn Brooks. I was speaking to her through the words of the poets about our experiences as young black women.

Later, after living with her question a bit longer, I began to see that the answer was as large as an elephant and that I had touched only its tail when I attempted to answer my sister's profound question with, "Because it works." I believe my sister's question was about her need to heal from not having been universally loved as a dark-skinned, loving woman. She knew that her question was an inquiry about my own life. She needed to know how would I help black people by being a Zen Buddhist priest. In the moment she asked, I couldn't find a way to convey to her that much of what I experienced in being black was much like what the Buddha taught.

I understood his teachings because I was raised with poor people, much like the ones Buddha saw when he left the temple. I was taught generosity without the notion of gain because it was not expected that everyone could give in return. I was taught compassion for having slave ancestry. I held a sense of spiritual equanimity while experiencing discrimination. My family and those around us lived with a communal sense in which everyone and everything was related-something that is called interbeing in the mindfulness community. Generosity, compassion, equanimity, and interbeingness were all essential to our survival. It was the way we embodied harmony. Buddha's message to me was about healing and regaining a sense of belonging within the community of living beings into which I was born. Being on the path of Buddha was a way of experiencing, as Charles Johnson, an African American Buddhist teacher and author puts it, "a long-deferred peace." To follow the ancient teachings of Buddha was to be life affirming. On the path of Buddha's teachings, I returned, through chanting and meditation, to that place within that had not been touched by the suffering of hatred. In following the path of Buddha, I began to peel off the masks that covered my original face. In the practice of Buddha's love, I eventually became aware of my life in all of its difficult and glorious moments.