This Thing Called Grace: A Q and A with John Blase 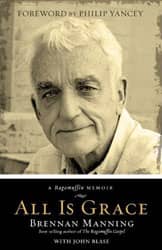 Brennan Manning has spent the past forty years helping others experience the reality of God's love and grace. A recovering alcoholic and former Franciscan priest, his spiritual journey has taken him down a variety of paths. He has taught seminarians, spoken to packed arenas, lived in a cave and labored with the poor in Spain, and ministered to shrimpers in Alabama. Brennan is best known as the author of the contemporary classics, The Ragamuffin Gospel, Abba's Child, Ruthless Trust, The Importance of Being Foolish, Patched Together, and The Furious Longing of God. His latest, and probably last, book All Is Grace: A Ragamuffin Memoir is a searingly honest memoir recalling the great struggles and heartbreaks of his life. And yet his message of extraordinary grace permeates the troubled narrative of this beloved "ragamuffin's" journey.

Patheos recently spoke with the co-author of All Is Grace, John Blase, aboutwhy Manning chose to write such a difficult memoir, who they hope reads it, and what they both learned about grace in the process. Blase is an editor and the author of numerous books and currently serves as a developmental editor for David C. Cook Publishing. [For more conversation on All Is Grace, including a book excerpt, visit the Patheos Book Club here.]

This is a deeply personal, honest, and raw memoir. How did Manning decide to open up and share his difficult story at this time?

As far as I know, it was a decision pressed by friends who persisted with 'you have to tell your story.' Brennan has never really understood why someone would want to read his story and I believe that humble hesitancy goes a long way. One reviewer called it 'a reluctant memoir' . . . I like that a lot.

What is your relationship with Brennan Manning and how did you come to co-author All Is Grace?

Initially Brennan worked with another writer but that didn't go so well. I was asked to step in and pick up the pieces. I had worked as editor on two of his previous books, so he trusted me. He always has. I don't know why that is, but it has felt special. I'm extremely grateful and consider him a dear friend.

What conversations do you hope this book inspires?

Hopefully it prompts questions around this thing called grace . . . It's a word that is relatively easy to sing about and is very familiar, especially in faith circles, but the ways in which that word plays out in our everyday lives is another matter entirely. This is a book where grace gets personal, very personal.

Brennan's intent is to witness, not persuade, so the design is not there to change anyone's mind. Brennan would be pleased if it unsettled the heart though.

What book, or which author, was your model for this book?

As his co-writer, my hope for the book's tone was honest but tender, and honoring to those who shaped his life for good or ill. I read Ivan Doig's This House of Sky a few years ago; that beautiful book was no doubt in my mind as we crafted these pages.