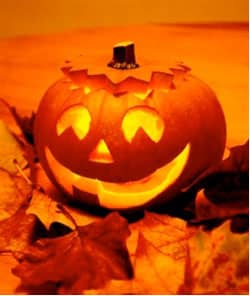 For more than a decade, I dressed up in a variety of ghoulish costumes for Halloween. In elementary school I sang about scarecrows coming to life and wrote poems about ghosts that lived in walls. If it was raining during our trick-or-treating expeditions, my father would drive my cousins and I around the neighborhood. As a result, I became a devout Satan worshipper. At night, I began to dance naked in the forest, purposefully bathing my body in the healing light of the full moon.

Just kidding ... about the worshipping Satan part. Some Muslims believe Halloween shouldn't be celebrated because of its pagan roots. Others feel like we should not partake in celebrations that don't come from Islam. I would count myself among the many Muslims who find Halloween celebrations relatively harmless, besides the processed chocolate bars. Yum! Artificial flavors, colors, sodium metabisulfite, and sulfur dioxide!

For the last couple weeks, five-year-old Warrior Princess (my daughter), fresh off the boat from Malaysia, has been seeing/poking at the scary-looking masks on display everywhere from the grocery store to the hardware store. So, when she began to talk about dressing up and trick-or-treating, I didn't think twice. We carved a jack-o-lantern together, and my wife began to think of costume ideas for her school parade.

Speaking of my wife—her family in Malaysia would often visit Chinese neighbors, for example, on Chinese New Year. As a multiethnic and multicultural nation, my wife was used to enjoying a day off for Muslim, Chinese, and Hindu holidays. Similarly, in South Asia you'll find some Muslims celebrating Hindu festivals and vice versa. It is, after all, quite possible to appreciate the positive in something without ascribing to the belief system behind it. In short, it's like taking the good and leaving the bad. (Except it may not necessarily be bad, it's just not for you!)

Unfortunately, some people don't seem to get that, and as a result we hear about things like Malaysia's National Fatwa Council declaring that yoga should be avoided because it could "destroy the faith of a Muslim."

It sounds ridiculous because it is. I would argue that what truly corrupt our souls are acts that disrespect people, animals, and the environment. My daughter dressing up like a British telephone booth will not destroy her faith as a Muslim. Neither will my weekly yoga class. Now if you'll excuse me, I have to go get my small, hairy Pakistani man costume ready.