When Will "Occupy Something" Turn Into "Do Something"? 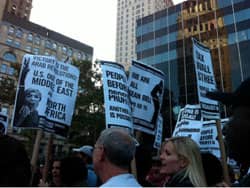 I wanted to be on board with the Occupy Wall Street (OWS) movement. Admittedly though, I have been flip-flopping in my views of the movement through its progression. The "We are the 99 percent" mantra of the participants resonated with me, early on. Unlike many of my generation, however, my struggle did not start with the recent economic recession and I do not view protesting as a healthy way to overcome these challenges.

Thirteen years ago my mother, my two siblings, and I left my father's abusive family in Pakistan to return to the United States. Our first nights of freedom were spent sleeping on the bathroom benches of Boston's Logan Airport, and we survived the years that followed camped out in a friend's basement. My former housewife mother worked hard to single-handedly provide for her three children, all the while battling a duel diagnosis of diabetes and breast cancer, diseases that left her unable to secure healthcare.

For my part, I tried to be the good Muslim daughter; I raised my younger siblings while my mother worked, graduated high school and college two years ahead of my peers, cared for my mother when she was sick, graduated law school, and committed myself to righting, as well as writing about, the injustices I saw in the world. Despite my industriousness and ambition, the recession left me, like many of my generation, overeducated, underemployed, and burdened with student loan debt that my bailed out bank refuses to negotiate about. And though I am grateful to be in a more privileged position than I was thirteen years ago, I find myself, yet again, starting over from scratch.

So I get it. I get what it is like to work hard in spite of all that life throws your way, only to feel like the system is set up so that families like yours never win. As a Muslim, I believe a life lived for God is a life dedicated to serving humanity. In my heart, I know something is terribly wrong when the greatest country on earth prioritizes the accumulation of wealth and power for a few individuals over protecting basic human life and dignity. Those of us anchored by our faiths have come to this acute realization because it is our religious communities that are left to provide for those who fall behind as the gap between the haves and the have-nots widens.

So how can a call from Adbusters for an experimental occupation of a symbolic location bring about the change we desire? Islam teaches its adherents to respect the law and seek social justice though constructive means. Emotionally charged gatherings lacking vision seem neither constructive nor strategic and have a great potential to turn chaotic. Based on the initial coverage it seemed the financial district of New York City had turned into a circus featuring all the fringe groups of my generation.

Many were dismissing the protests as the inevitable radical leftist response to the Tea Party; in fact, some of the protestors themselves were purporting it to be so. As the movement grew exponentially across the United States, even more worrisome were the continuing reports of police abuses and arrests in cities such as New York, Boston, and San Francisco.

So when I first visited the OWS site I expected to see rage and a Tyler Durdenesqe personality ranting in the middle of the park: "I see all this potential, and I see squandering. God damn it, an entire generation pumping gas, waiting tables; slaves with white collars. Advertising has us chasing cars and clothes, working jobs we hate so we can buy shit we don't need. We're the middle children of history, man. No purpose or place . . ."

Chuck Palahniuk would have been so proud.

Instead, I saw a quintessentially New York scene of mostly white man-boys with lost expressions and in need of hugs. It was tragically comical. They were gathered not on Wall Street itself, but a couple blocks away at Zuccotti Park. A makeshift information booth stood in the corner with a poster board schedule for the day, which included everything from a "slutwalk" to an anti-nuclear proliferation rally. Earnest intellectuals and the downright bizarre milled about. A few men stood off to the side discussing their latest Kickstarter project. One woman held a sign that read, "I remember the '90s." Immigrant vendors, predominantly of Middle Eastern backgrounds, were parked in the area, eager to sell passersby bubble tea, gyros, and "I Love NYC" t-shirts in an effort to achieve their own American dream.