Editor's Note: In 2010, Amina Wadud, a noted author and scholar on Islam and gender, traveled to Makkah and Madinah to perform her first Hajj and celebrate Eid ul-Adha. Wadud kept an extraordinary blog about Hajj experiences. Patheos is combining her blog posts into three essays covering her preparation, her actual Hajj, and coming home. Click here for part one. In part two, Wadud talks about getting to Makkah, frustrations in the Kingdom, and falling in love with the Ka'abah in the most romantic city in the world. 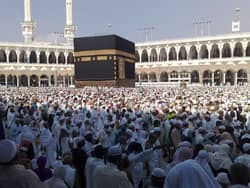 Well the last day held all the excitement that should be expected, I guess. I went to see The Hijabi Monologues the evening before as it made its circuit through Northern California. This stop was at UC Berkeley. I'm sure it would have taken at least two of the other members of the audience to even come close to my approximate age. Clearly I was out of my element, but I looked at it as a kind of anthropological study if nothing else.

So here's my take. In an effort to take up the challenge of negative stereotyping about women who wear an Islamic headscarf, the creators of this theater performance mimicked the style of The Vagina Monologues. That it is a mimicry is one problem—it lacks a certain kind of originality. But let us just say VM sets a new standard and then see how other renditions measure up to it, shall we? There's a continual sense of Muslim Americans subjecting themselves to some kind of static notion of what it means to be American. This is what I felt throughout the performance.

In this case, the standard is set by the average white non-Muslim college student. Some of these skits were funny, then, like hijabi and niqabi girls trying to be less nerdy (stereotype number one) and go off to an important college sports event (stereotype two) in search of a place to pray at halftime which they were reasonably confident was not wet with vomit, pee, or the rain. No, it really did have some funny parts. But it was just that all the college girls were too squeaky-clean—all advanced-placement honor students from middle class suburban families—for my take on the reality of that age group and Islam in America.

Then they did one skit of someone not in their age group, also suburban middle class, but a mom. This was a dramatic piece, so you could almost forgive them for playing right back into the weeping widow stereotype. Again not literally, because the tragedy was not the loss of her husband, but the loss of her recently graduated from college son.

There was one feisty skit (a hijabi confessing she likes to curse "a lot"), but no working-class, no poor people, no African Americans, and in the end, everything would be molded to "fit" a white middle class A-plus student stereotype. So next time the audience is half my age, I'll think twice about giving them my last free evening. It's good we are standing up for ourselves. I guess poor and working-class young Muslim women will eventually make their stand or their debut on the stage. But by then they might have become professional or career women, who were also missing in these youthful plots.

When it was over I had used up all of Friday and was still not done packing, and even had last-minute shopping for the recommended cold medicines: Airborne and extra vitamin C. Oh yeah, and I needed fingernail polish remover. It must have been some time before Ramadan when I last went for a pedicure. In that time, the nails had grown and been clipped so much, the tiny bit of color clung to the ends of the toenail like a French tip. But still it had to be removed.

Here's the thing: Technically, the water from ablutions cannot reach the actual toenail (or fingernail, but I never wear color on my hands, it offsets my jewelry) so to make my formal entry into ihram, I needed a clean toe. I also clipped those nails, hand and foot, then used the emery board to make them nice and neat and super smooth. No nail clipping in ihram, which mean I don't want to risk a chip and then get annoyed at some little dangling piece.

It was also recommended to shave, whatever body hairs are the norm. I'm not from a very hairy stock, so that is pretty much limited to under my arms. So why did I overdo it? My underarms chafed, and I needed to use some cortisone on my tender skin. Way to try out an unknown scentless deodorant.