Editor's Note: In 2010, Amina Wadud, a noted author and scholar on Islam and gender, traveled to Makkah and Madinah to perform her first Hajj and celebrate Eid ul-Adha. Wadud kept an extraordinary blog about Hajj experiences. Patheos is combining her blog posts into three essays covering her preparation, her actual Hajj, and coming home. Click here for part one. Click here for part two. In part three, Wadud talks about getting the difficulties of Hajj for women, cultural Hajj, travelling to Mina and Muzdalifah, and her experiences at Arafat. Wadud wrote more posts about her experience, but this is last that we have access to at this time. 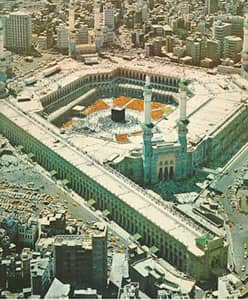 December 7, 2010—Using the Toilet in the Grand Mosque

Somebody really needs to write a book on how to survive and thrive at hajj for women. I'll include a few tips and think about this idea for the future. There are undoubtedly different preexisting circumstances, so there should be a section for married women (two types: the ones whose husbands are more interested in staying beside his wife than being beside another man, and the ones who will abandon their wives at the drop of a hat); then for the single women with male mahram; for the single women with a group; and then for single women traveling alone.

As for traveling alone, as I did, there are a few extra concerns about sanity in the midst of this particular insanity. For example, by day two I bought my first black abaya and niqab. Whenever I went out without anyone I know, I wore it. The anonymity is really useful; plus you can do a lot of observing without being personally observed. It helps if you look like you are not interested in anybody, or like a loose woman just because you are not attached. It erases nationality, at least of the non-Arab kind, which is helpful, again, for negotiating the terrain without undue hassle. In my case, because I speak Arabic, I "pass" as Arab and therefore supposedly a bit more in the know. It also let me bargain my way through the shops, whatever little shopping I did in Makkah.

The shopkeepers are mostly not Saudi, so they detect an accent, but usually think I'm Egyptian from the dialect I use the most. My roommate said many of the shopkeepers are Urdu-speaking, but she got better service when she spoke English, especially in the jewelry shop.

Anyway, by now I hope you see that it helps always to have a plan. Today, I encountered something I was hoping at all costs to never have to plan for: a visit to the water closet, the women's toilet. This is also where the women's wudu' stations are. Makes sense—if you use the toilet, you need wudu', but it would be nice if you could make wudu' without entering the toilet room.

The guard who sits outside the entryway is male. His job is mostly to tell the men "this is the women's room." (Forgive my comparison with the guards in the mosque who tell women this section is not for them, it is for the men!) Anyway, once I entered behind the green curtain, I was on a downward ramp, wheelchair accessible all the way. The ramp had railings, but these were covered with drying laundry. I'll have to say something about how people camp out at the haram, whether for a long time or even like we did, for several prayers in a row. There's lots of sleeping in the mosque, another reason this trip to the toilet might be inevitable.

The toilets themselves are the seatless ones, and the istinjaa' is just a piece of rubber hose attached to the water spigot. There is also a shower in there, so if necessary, a woman could shower in each toilet stall. Therefore, these elements all combine to make this a place of complete wetness. I'm trusting that it was mostly just water, but I erred here when I chose to bring my purse with my iPad, camera, and money and to leave my water bottle, shoes, and prayer rug as markers to my Iranian neighbors that I was returning. As it was, I did still find my space had been invaded a bit, mostly by the sleeping husband of the woman next to me, with whom I initially wanted to create a women's cluster. When the two Iranian women joined, it was set.

I pretty much knew what to expect in the toilet; I just forgot to take my shoes. After using the facilities, bringing my own pocket-size tissue (I had been reminded about this by my friend Aishah, but I always carry my own from travels in many countries before this one—I was familiar with this). The lines were not too long, but since they form for each stall, it was best for me to just make my way through the bottleneck at the two ends of a long row of stalls, and in no time at all I was done. There's no flusher (although I've seen some seatless toilets that do have flushers), so I had to use the istinjaa' hose to run water after myself. I don't want to think about whether or not everyone also does this manual flush, because, well, I've used enough outhouses at amusement parks or natural sights in America with no water to be thankful for what I had.