Celeb Princess Gives It All Away!

November 17, 2011 by Pat Gohn
"Like" the Patheos Catholic Page on Facebook to receive today's best commentary on Catholic issues. 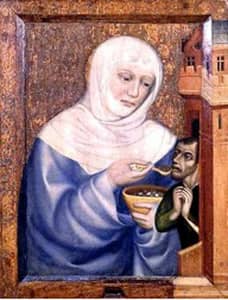 I can imagine the headline: Celeb Princess Gives All Away to Poor and Sick, Feeds 900 a Day!

A news story like that would just begin to describe today's feast for St. Elizabeth of Hungary, whose faith and virtue blessed her 13th-century feudal world. Centuries later, the story of her charity astounds our consumer-driven materialistic society. Her generosity was not just a singular gesture of philanthropy—that would be unique enough to make it news—it was a way of life: a radical and simple response to the gospel lived in the spirit of St. Francis of Assisi, another radical rich kid of Elizabeth's day.

A saint is someone who is not only deliriously head-over-heels in love with Christ, but whose interior contemplation of Him gives rise to consistent heroic virtue and charity—an external love of neighbor that typifies Jesus' example of self-giving.

. . . man, who is the only creature on earth which God willed for itself, cannot fully find himself except through a sincere gift of himself. (Gaudium et Spes, par. 24)

St. Elizabeth of Hungary typified this "sincere gift of self" in all phases of her life—as a single woman, as a married person, and as a widow.

Born in 1207, Elizabeth was the daughter of King Andrew of Hungary. As was customary, she was subject to an arranged marriage. At the age of 4, Elizabeth was sent to live in Thuringia (in Germany), intended as the wife of the eldest son of the Landgrave Hermann of Thuringia. In time, the eldest son passed away, and eventually, Elizabeth became engaged to Ludwig, the second son.

Despite her opulent surroundings, Elizabeth became a pious and prayerful young teen. Her life seemed to many a constant quiet rebuke of the lifestyle of the court, yet Ludwig invariably would come to her defense. Elizabeth and the young Duke Ludwig grew to love one another and they were wed in 1221 when she was 14 and he was 21.

The marriage was . . . a happy and exemplary one, and the couple . . . devotedly attached to each other. Ludwig proved himself worthy of his wife. He gave his protection to her acts of charity, penance, and her vigils, and often held Elizabeth's hands as she knelt praying at night beside his bed. He was also a capable ruler and brave soldier. The Germans call him St. Ludwig, an appellation given to him as one of the best men of his age and a pious husband . . .(The Catholic Encyclopedia, from New Advent)

Elizabeth became a mother to three children in six years.

Despite her social standing, Elizabeth chose simplicity, penance, and almsgiving as her way of life, becoming more fervent after meeting a group of Francis' followers. To the consternation of her wealthy family members, she gave away royal robes to peasants, and bread, daily, to the hundreds who would show up at the gates. (Because of this bread distribution, Elizabeth is often called the patron of bakers.) Elizabeth also made provision for a Franciscan monastery to be built nearby. Eventually she opened a hospital for the sick and the poor near her home at Wartburg Castle (now a UNESCO World Heritage site.)

Sadly, a few months after her third child was born, word came that Ludwig—who long championed Elizabeth's faith and good works—died while on a Crusade with Emperor Frederick II. She grieved her husband deeply. After his death, pressure from his family began to mount; they eyed Elizabeth's charitable work as a squandering of the family fortune. Eventually they dispossessed her, evicting her and her children from the castle.

This did not stop Elizabeth from "making a sincere gift of herself" to others. She refrained from marrying again and—finding helpful care for her children—joined the Franciscan Tertiaries (what we know today as the Secular Franciscan Order). In her short remaining years, the widow and mother used her remaining property to found yet another hospital, where she could be found caring for the sick.

Dying at the tender age of 24, Elizabeth exemplified how young people can live lives of deep charity motivated by a rich faith—something as countercultural for her time as it still is in our own.