November 10, 2011 by Pat Gohn
"Like" the Patheos Catholic Page on Facebook to receive today's best commentary on Catholic issues. 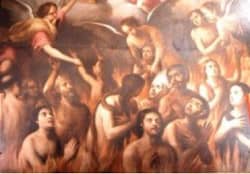 In a nanosecond I saw my life pass before my eyes as an oncoming, out-of-control Camaro crossed into my lane. I did all I could to avoid the impact, while thinking, "Oh, God, this is how I'm gonna die."

But then I didn't. The pulverizing sound of the crash was less frightening that the thought of what we would look like afterward. The little economy car was totaled. Despite a severe whiplash and bruises, I managed to get out from behind the crooked dash, unbuckle the children in the back seat—crying and shaken but okay—and walk away.

That day, and for weeks after, I grew in gratitude for the preciousness of life amidst harrowing flashbacks and "what if's?"

Five years later I faced doctors telling me I had breast cancer. At first I was misdiagnosed, so it took time to determine what was really going on. Four surgeries cleared up the mystery, changing me in ways physical and spiritual.

And, again, I grew in gratitude for the preciousness of life amidst the narrow razor margins signifying a good versus bad prognosis.

I felt like I had cheated death for the second time, through no power of my own; I reveled in the Lord's provident bounty. Indeed, that year Thanksgiving became more than just a national holiday to celebrate with family and friends. It was a deeply personal one. And every birthday and anniversary after that became miraculous milestones, mini-Thanksgivings.

The first Thanksgiving celebration in Plymouth in 1621 marked the successful harvest season following the survival of fifty-three remaining "pilgrims" coming to a foreign land and making a new settlement, despite the tragic loss of some of their number. Still, the need to give thanks in a tangible way was no less overwhelming: to affirm the preciousness of life.

Maybe you have felt the close shave of death in your life, or that of a loved one? It is unforgettable, and the need to memorialize presses in on us. I'm told veterans who've seen combat, and civilians of war-torn nations have a deep need to gather and share their stories with willing listeners.

These death-defying moments cry out for recognition. And so we baptize them with ritual and stories told over and over. Not because we are moribund or have a death wish; no, precisely the opposite.

We were made for life and for the living of it.

Death may be a scary specter to our mortal sensibilities, yet we sense the preciousness of life supersedes its fragilities. The human person intuits a glorious existence, if not in what we know now, but what is to come.

God so love the world that he gave us his only begotten Son that whoever believes in him will not perish but have eternal life (Jn. 3:16).

November is the month of holy souls in the Catholic Church; we recall those who've left this life ahead of us, who are still in need of purification and movement on to the fullness of glory. We pray that they may come into the fullness of eternal life. We pray too for ourselves. Such mindfulness should impart to us that we too possess an eternal elasticity and destiny.

The blessing of all this is not that we have survived circumstances that take our breath away or stagger our imaginations, despite the amazing depths of gratitude they build in us.

The deepest blessing is that they all rest upon the undeniable gift that Jesus guarantees that we will not perish—a gift secured by his dying and rising to new life again.

Jesus gave his life up for me and for you. His Cross means something: Death is not an end, but a threshold. And when a Christian is baptized, they are baptized into Christ's death. (See Rom. 6: 1-11.) That beatitude—or supreme blessedness—may seem counter-intuitive until one faces death squarely in the face, and then, suddenly, the preciousness of such a promise comes fully alive.

The beatitude of eternal life is a gratuitous gift of God. It is supernatural, as is the grace that leads us there. (Catechism of the Catholic Church, par. 1727)

The baptized Christian indeed cheats death, thanks to Jesus. Death no longer has the final word. And there is Something More.

When I awaken to this deepest blessing, this beatitude, then I am truly living a life of gratitude. Then I can come to true thanksgiving—knowing what the holy souls know—that the Sacred Heart of Jesus is a consuming fire that tempers and transforms the rust of our souls.

We should not spurn or scorn the heat of the crucible that burns away the dross of our earthly existence. For it is a window allowing eternity to be seen much more clearly.

For when the nanosecond of death finally does come crashing in on us, it will be filled with the True Presence of the One who can usher us through.