The Drummer Boy of Chickamauga

November 29, 2011 by Pat McNamara
"Like" the Patheos Catholic Page on Facebook to receive today's best commentary on Catholic issues. 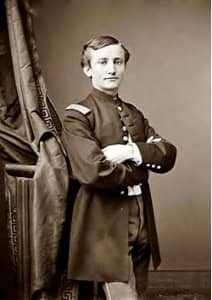 On the afternoon of September 20th, 1863, during the Battle of Chickamauga, as Union troops retreated under hot pursuit, a Confederate colonel spotted a young boy in a blue uniform carrying a sawed-off rifle. "I think the best thing a mite of a chap like you can do," he called out, "is drop that gun." Little Johnny Clem, the twelve-year-old drummer of the 22nd Michigan Infantry, turned around, shot the colonel, and ran safely back to the Union lines.

More than ten thousand soldiers under the age of eighteen served in the Union Army during the American Civil War. Among the youngest, and certainly the most famous of them, was John Lincoln Clem (1851-1937), known as "the Drummer Boy of Chickamauga." A national hero by age twelve, Clem went on to serve nearly fifty years through three wars. When he retired in 1916, he was the last Civil War veteran on active duty with the United States Army.

John Joseph Klem (he changed his middle name to Lincoln in honor of the President) was born in Newark, Ohio, on August 13, 1851, to immigrant parents from Alsace-Lorraine. Raised in a pious Catholic family, he was one of three children. (Somewhere along the way, the family name was changed to Clem.) He was baptized at St. Francis De Sales Church in Newark and studied at the local Catholic school.

In May 1861, as the war began, the nine-year-old boy ran away from home and offered his services as a drummer to an Ohio regiment. But he was rejected on account of his age. However, he eventually joined the 22nd Michigan Infantry as a drummer.

He was called "Johnny Shiloh," based on the belief that he served in that battle. The story was actually a myth. But as the youngest soldier in the Union Army, Clem was a nationally renowned figure. For his actions at Chickamauga, at age twelve he became the youngest noncommissioned officer in history. By the time he was discharged in 1864 at age thirteen, he had been wounded twice.

Back in Ohio, he finished his schooling. He applied to West Point several times, but failed the entrance examination. In 1871, however, President Ulysses S. Grant appointed him a second lieutenant in the United States Army. He would serve on active duty for forty-five years, mainly in the Quartermaster Corps, reaching the rank of Brigadier General. At the time of his retirement, he was promoted to Major General.

When he left home in 1861, Clem hadn't yet received his First Communion, and he drifted away from religion as he got older. In 1875, Lieutenant Clem married Anita French, daughter of Major General William H. French, and joined the Episcopal Church. At age fifty-two, after Anita's death, he married twenty-five-year-old Elizabeth Sullivan, a devout Catholic. Their daughter Elizabeth Ann, born in 1906, was 'the center of his affection and attention and remained so until he died."

As a child Elizabeth had attended the best Catholic schools in Washington, where her father was stationed, and studied abroad in Europe. At age twenty-three, she entered a Carmelite monastery in Indianapolis. In religious life, she took the name Sister Anne of the Trinity. This was the occasion of her father's return to the Catholic Church.

In the summer of 1931, at age eighty, Clem made a retreat with the Jesuits in Maryland. He wrote his niece:

You will be glad to learn that I am again a full fledged "Holy Roman" and feel happy as I know all my family will be pleased . . . took my First Communion yesterday . . . My knees are still sore. I would have fallen if my friend General Lenihan had not supported me at the Communion. After that the Fathers told me not to kneel any more.

A year later he made his Confirmation in Indianapolis while visiting his daughter. An active and devoted Catholic until his death, he was remembered as a "small man, known to be quiet, gentle, and kind." On May 13, 1937, reciting the rosary at his home in San Antonio, Texas, he passed away at age eighty-five. His tombstone at Arlington Cemetery reads, "The Drummer Boy of Chickamauga."