Unfortunately, Mark Noll is right. Arising out of revivalism, American Evangelicalism tends to substitute pragmatism for principle. He also writes, "To put it most simply, the evangelical ethos is activistic, populist, pragmatic, and utilitarian . . . dominated by the urgencies of the moment" (The Scandal of the Evangelical Mind, 66, 12). This ethos plays a key role in charting the course of its philosophy of theological education. Of course, such pragmatism is not unique to Evangelicalism. William James's influence upon Western culture extends far beyond the narrow confines of American Evangelicalism. So we should acknowledge that pragmatic concerns affect philosophies of theological education across a broad spectrum—religious and secular; denominational and independent; evangelical, fundamentalist, progressive, and liberal. For present purposes, this simply means that the river of Evangelical pragmatism is fed by two streams: revivalism and William James.

As an Evangelical historian, theologian, and educator, the principles that concern me in this brief essay are theological ones central to the faith confessed by the Evangelicals. There is, however, a complicating factor. If Michael Spencer, Scot McKnight, and the Pew Forum have it right, doctrinal commitment is diminishing among Evangelicals, "post-evangelicals" are abandoning such basic evangelical commitments as biblical inerrancy and the unity of the Hebrew Bible and New Testament, and a growing number of Evangelicals—perhaps as many as half—entertain the idea that several religions other than Christianity are salvific. (See Michael Spencer, "The Coming Evangelical Collapse," Christian Science Monitor, 10 March 2009; Scot McKnight, "The Ironic Faith of Emergents," Christianity Today, September 2008, 62-63; Pew Forum on Religious & Public Life, "U.S. Religious Landscape Survey," 4.)

Evangelicalism, then, is in a new era. In Christine Wicker's book, The Fall of the Evangelical Nation: The Surprising Crisis Inside the Church, we see a progressively perishing Evangelicalism that is increasingly scorned by American society. For she claims, Americans are "less doctrinaire. More changeable. More flexible. Less religious" (p. 56). If the portrait she paints is accurate, we can anticipate increasing pressure on Evangelicals to become "less doctrinaire" and "more changeable." To think that Evangelical seminaries and churches are not already experiencing such pressure would be naïve. They themselves may see the pressure to become more flexible and less doctrinaire as benign. But it portends a great danger—namely, the temptation to replace principled theological reflection with a doctrinal apathy and pragmatism that see such reflection as incompatible with the survival of Evangelical schools and seminaries.

Evangelicalism's pragmatism, I suggest, inevitably leads to an educational philosophy that will secularize its institutions. In what follows, I mention merely three doctrinal concerns from among many that need serious consideration. Readers will notice that my convictions on the shape which theological education ought to take are in sympathy with those of Fred Schmidt in his Patheos essay, "Is It Time to Write the Eulogy?: The Future of Seminary Education," for which I am grateful.

The Ecclesiological and Pneumatological
A dissident element remains within Evangelicalism, particularly in its Free-Church form, an element that can be traced back to its early history in the age of reform. Today, it clamors not so much against the Roman Magisterium as against the notion of a necessary, gifted, authoritative community. In the place of such community, it typically puts the individual's experience of the Spirit. More and more, young people who desire to pursue vocational ministry are denying the need for a seminary education. Some churches encourage this trend. Though seminaries are not the local church, they are components of the universal Church—communities of spiritually-gifted specialists, men and women gifted by the Spirit to train and spiritually form others, in theory and practice, for ministry. And gatherings of students with such spiritual specialists are superior environments for edification by the Spirit, especially when compared to the student—even the Spirit-indwelt student—in isolation. Seminaries must continue unapologetically to insist, and churches must continue to agree (unless they wish to claim that local churches can offer the same concentration of spiritual specialists), that seminaries, with students in gathered residence, remain the prime environments, the indispensable communities, in which to receive intensive training.

Hatred in the Name of Religion
Linda LaScola
3 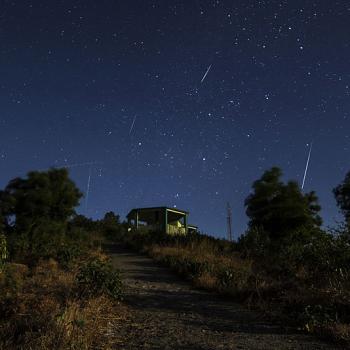 Living the Entangled Life: World-Changing Insights from Mushrooms & Mycelium
Carl Gregg
Get Patheos Newsletters
Get the latest from Patheos by signing up for our newsletters. Try our 3 most popular, or select from our huge collection of unique and thought-provoking newsletters.
From time to time you will also receive Special Offers from our partners that help us make this content free for you. You can opt out of these offers at any time.
see our full list of newsletters
Editor's picks See all columnists