Failure Worth Imitating: A Review of "Flunking Sainthood" 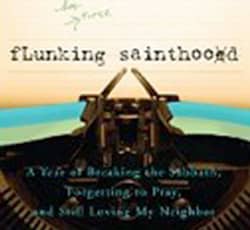 Flunking Sainthood:
A Year of Breaking the Sabbath, Forgetting to Pray, and Still Loving My Neighbor

It's hard to imagine a religious memoir with wider appeal than Flunking Sainthood by Jana Riess. Although clearly the work of a committed Christian, it scrupulously avoids proselytizing (pains are taken, in fact, to obscure precisely which religion Riess adheres to) and doesn't worry much about doctrine. Instead, it details what the author learns from exploring practices well outside her spiritual comfort zone, including fasting like a Muslim, observing an orthodox Jewish Sabbath, and praying like a Russian Orthodox Christian. The tightly focused and concise result can help secular readers understand what religion offers at its best, while the book's ecumenical approach to spiritual self-improvement lays down a challenge to the religiously dogmatic and doctrinaire.

Nevertheless, in the hope that other believers will imitate Riess and strive for a more inclusive idea of who is one's neighbor, I mention a fact obscured in the book, though not on Riess's blog, her Wikipedia page, or much of her other work: she is Mormon. Though the specific affiliations of any number of people are mentioned, her own tradition, however, is discussed in terms like these: "I'm part of a pretty low-church Christian tradition, where people are encouraged to pray every day but there's no fixed formula for doing so."

Riess, who blogs about religion at Beliefnet.com, decides one January to spend the rest of the year adopting a new spiritual practice each month in the hopes that it will "pop a little zing back into" her relationship with Jesus. Despite a thoroughly secular upbringing courtesy of atheist parents, Riess succumbed to the romance of religion as a teenager, but finds her initial passion for God impossible to maintain. In fact, Riess announces that she is "lousy" at prayer and that a primary goal for her year of radical spirituality is to "feel like God was accepting my calls."

The first practice she adopts is fasting, getting a particularly onerous practice out of the way in February, the shortest month. Knowing that she can't fast for days on end, as was customary for the Christian ascetics whose teachings she also reads in February, she decides to approach fasting as Muslims do during Ramadan, forgoing food as long as the sun is up—easier to do when days are short. But the fact that the fast is doable doesn't make it pleasant, and it certainly doesn't bestow the sometimes advertised benefit of "supersizing prayers." Instead, its main virtue for Riess is that it helps her value more practices done as part of a community. Although she manages to experience "occasional glimmers of quiet elation and tranquility" by the end of the fast, she underscores that her main feelings during it are profound loneliness and isolation, as when she watches others eat a meal she can't partake of, or gets breakfast out of the way before anyone else arises. "It is not good for people to fast alone," she concludes. Likewise, "deep prayer and meditation," the only spiritual practice during the year that Riess completely abandons, is "just not the kind of practice anyone should try alone." Instead, it should be attempted only under the guidance of an experienced teacher.

February establishes the template for the year: Riess reads texts (ostensibly) offering insight into a particular practice, then sets out to "master" it in a month. This is the basis for the book's primary weakness: Riess really seems to expect, at least initially, that she'll unlock the secrets of a spiritual practice in just over four weeks, both in terms of how to do it and what it teaches a practitioner about his or her own soul. Riess, whose credentials include a Ph.D. in Religious Studies from Columbia, is no spiritual neophyte, but it's a bit striking that the book is called Flunking Sainthood because she is shocked and chagrined that she fails to "master any spiritual practice in thirty days." It's rather like reading a memoir by an erudite, accomplished linguist who plans to study twelve foreign languages over the course of a year and is humbled when she hasn't achieved complete fluency in one language before it's time to change the calendar and begin studying the next. Well, duh, you want to say. If discipline of any sort were that easy, we'd all run marathons, ace advanced calculus courses, and memorize a new piano concerto every week or two.