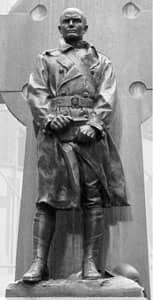 With Veterans Day approaching, this week's column features a priest whose statue millions pass daily in Times Square, a World War I Chaplain featured in the 1940 movie The Fighting 69th. Professor, pastor and soldier, apologist and ecumenist, Francis Duffy was, one historian writes, "the best-known priest in New York." A transplanted Canadian, he became the quintessential New Yorker: in love with the city, and living in the very heart of it.

Born on May 2nd, 1871, Francis Patrick Duffy grew up in the town of Cobourg, one of eleven children. His parents emigrated to Canada from Ireland. After Frank finished college in Toronto, he secured a teaching job at the Jesuits' Xavier High School in Manhattan. A year later, he began studies for the priesthood. He stayed in New York for the rest of his life.

Ordained a priest in 1896 for the New York Archdiocese, he pursued graduate studies at Catholic University in Washington, D.C. He then joined the faculty of St. Joseph's Seminary in Yonkers, teaching philosophy for fourteen years. One student called him an "Irish Socrates, not a lecturer, but a teacher who probed the mind of each student, sometimes in a disquieting fashion."

Although Duffy served briefly as a Chaplain during the Spanish-American War, it was as a scholar that he first achieved national renown. He helped found The New York Review, perhaps the finest American Catholic theological journal of its time. For Duffy, a major challenge the Church faced was "a certain intellectual sloth which masquerades as faith." The Review featured the latest theological advances worldwide and espoused the latest Biblical scholarship.

This was the era of what is called the Modernist movement, which Duffy's biographer Stephen Harris describes as "an attempt to reconcile historical Christianity with modern science and philosophy." But in higher ecclesiastical circles, theological innovation was increasingly seen as something subversive, a concession to a secularizing world. In 1907, Pope St. Pius X condemned Modernism, and the Review operated under a cloud of suspicion. Within a few months, it ceased publication.

Duffy and his associates operated under a cloud of suspicion, and soon they were reassigned from the seminary. Duffy himself was sent to the Bronx, to a converted storefront titled Our Saviour Church. In time he built a full-standing church, a school, and a day nursery for working parents. While he enjoyed the work (he loved being around people), he longed for a still more challenging task, what he called "a man's job."

In 1916, Father Duffy was appointed Chaplain to the 69th New York Regiment (later renumbered the 165th U.S. Infantry), a predominantly Irish unit that saw hard fighting during the Civil War. When Duffy joined the regiment, Harris noted, "You could fill up a company with just O'Briens, O'Connors, O'Connells, O'Neills and O'Reillys." As the United States entered the First World War, it earned hard-fought battle honors on the Western Front, in places like St. Mihiel and the Meuse-Argonne.

Duffy loved the Irish character of the regiment, particularly its Irish Catholic character. He called the regiment his "parish—an itinerant parish." But he was no chauvinist, either ethnic or religious. He told the troops, Catholic and non-Catholic:

I come to you in soldiers' togs, with a message from the Church. I want to be your friend, whatever your religion may be. I know many of you are leaving families behind you and will have many worries. Come to me with them and you will find me ready with a wide word and a merry one.

And he made an impression on the troops, who remembered him as a "salty personality, full of force and flavor." One soldier, after going to Duffy for confession, told his commanding officer: "You can put my name down for any old job out there. I'm all cleaned up and I don't give a damn what happens now."

The regiment celebrated St. Patrick's Day, 1918, in the trenches singing traditional Irish songs. Through that summer and fall, he went "over the top" with his men. A newspaper reporter saw Duffy . . .

. . . covered with mud and grime . . . in the thick of the fighting, cheering on the living, administering the last rites of his Church to the dying, filling the place of a stretcher bearer who had been struck down by a bullet, assisting the wounded, darting hither and yon, a ministering angel . . . . For 117 hours he was under fire without rest.

Many felt he was pushing himself to a nervous breakdown, and he admitted: "I felt as if I were running on four tires and one cylinder.