November 11, 2011 by Katrina Fernandez
"Like" the Patheos Catholic Page on Facebook to receive today's best commentary on Catholic issues. 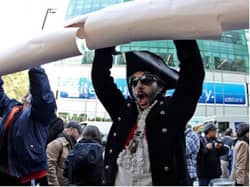 Despite having a very low opinion of the people occupying Wall Street I recently found myself coming to their defense. A well-known and respected Catholic priest, Fr. Longenecker, had a very witty alternative for those occupying all across the country. He suggested they would be perfect candidates for the religious life. He was being completely facetious of course, but when I shared his clever post on my blog the reaction was decidedly mixed. Some thought it was funny and appreciated the intended humor while others found the idea of more liberals joining the Church absolutely horrifying.

Intrigued by those varying responses, I brought up the topic with a few friends one evening. We talked about the Catholic Workers, a Catholic movement started by Dorothy Day, who were already involved in the Wall Street protests. This led to the topic of social justice within the Church, which naturally led to the discussion of liberalism in the Church. By evening's end we had unanimously decided that the kind of person occupying Wall Street was completely ill-suited for our Church.

The Church is plagued with enough problems already and we all agreed that adding more kook-buggery was not in her best interest. We don't need more liberals infiltrating the Catholic Church and trying to change her for their own agendas.

What started out as humorous blog post suddenly warped into a debate about who could be considered worthy enough to identify themselves as Catholic. It was decided Liberals were not worthy enough. If the Church were a country club we could have signs made boldly stating our membership policy. However, the Church is not a country club.

Basic Catholic 101 taught us the word 'catholic' is derived from the Latin catholicus, and from the Greek katholikos meaning 'universal'. So how does the meaning of the word reconcile itself with an exclusive membership mentality? It doesn't.

While I initially agreed that 'those people' would cause more harm than good to our Church—my Church—after much reflection I had to concede that I was wrong. My thinking just didn't make any sense when you factor in God and redemption. You see, for all our intellectual pontifications, my friends and I had failed to see beyond our own human reasoning. We did not give credit to the fact that God changes people. He converts sinners and open hearts.

The Church regularly prays for the conversion of sinners, so how can one justify praying for their conversions, while insisting on exclusivity? Do we only want certain types of sinners to convert and the rest can literally go to Hell?

It's no smaller matter converting to Catholicism either. There is a formation process called RCIA, Rite of Christian Initiation for Adults. This process can take anywhere from one to two years. By the time an individual is ready to make a full profession of faith, they've endured a sort of spiritual wringer and been given multiple opportunities to back out if they learn something about the faith they just can't reconcile.

There is no danger of someone suddenly deciding to leave Wall Street and become a monk. After the months or years of formal conversion process, most religious orders ask a convert to wait another two years before trying their religious vocation. It is simply not a thing that can happen overnight.

If someone from Occupy Wall Street decided to investigate the Catholic Church I contend this would be a cause for celebration not trepidation. It would be like a sick person finally deciding to seek medical attention. To use another medical analogy (as a nurse I use them a lot), the Catholic Church is like a hospital. When you are spiritually ill you go to the Church. You don't deny an ailing man admission on the basis that the hospital already has enough disease and admonish the patient to get better first. You find him a clean bed, dress his wounds, and begin treatment—no matter how contagious the sickness.