The Greatest Super-Story Ever Told: A Review of "Mutants and Mystics" 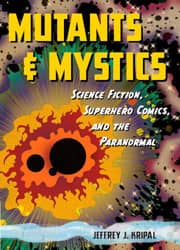 In 1901, American psychologist and philosopher William James gave a series of lectures that changed the study of religion forever. The lectures, later published as The Varieties of Religious Experience, took religious experiences seriously without considering whether or not they came from an objectively existing God. Regardless of their origins, James argued, religious experiences occur in every culture, and they are worthy of open-minded, careful study.

Religion scholar Jeffrey J. Kripal's Mutants and Mystics: Science Fiction, Superhero Comics, and the Paranormal begins with the same premise: human beings have paranormal experiences, and they deserve to be taken seriously. Kripal defines the paranormal as a type of mystical encounter, "a dramatic physical manifestation of the meaning and force of consciousness itself." As an example, he offers his own experience during a festival in India in 1989: Kripal felt the goddess Kali dancing upon his paralyzed body while he was flooded with sexual pleasure and occult information. Whereas religion used to be the primary repository for mystical ways of thinking, however, the decline of religious institutions and the rise of materialism have left a gap that is being filled by science fiction. Through research into the lives of speculative fiction writers and artists, Mutants and Mystics reveals the uncanny encounters that have inspired their art.

Mutants and Mystics builds from Kripal's earlier studies of Eastern and Western mysticism and the human potential movement. These historical and cross-cultural studies frame what he calls the "Super-Story," a set of narrative elements that recur over and over in American popular culture and provide a system of religious meaning for paranormal experiences. Comics by Alan Moore, Grant Morrison, Jack Kirby, and Otto Binder, as well as speculative works by Charles Fort, Philip K. Dick, Barry Windsor-Smith, Ray Palmer, Whitley Strieber, and others are contextualized within esoteric religious movements and alternative scientific models.

Kripal's Super-Story is thoroughly flavored with scientific language. In its narrative, humans have encounters with divine intelligences who come from far away (sometimes from outer space). Through contact with these beings or other means, humans discover a potent, often erotic energy within ourselves that can transform, save, or even destroy us. This energy is explored in the context of evolution, as we come to see ourselves as endlessly mutating, endlessly changing. We gradually become aware that we are in control of this creative process: humanity is self-creating, collectively crafting its own reality much as an author writes a story. Finally, we realize that the divine intelligences we encounter are not external after all, but a reflection of ourselves. As Kripal writes, "We can recognize that we are pulling our own strings, that the angels and aliens, gods and demons are us."

Kripal suggests that this is a story we can use. The Super-Story affirms the reality of the uncanny experiences that we and our loved ones may have, but it also expands our sense of what human beings can become. We are more than physical bodies, and we are more than what Western religion thinks of as "spirit"; rather, we are beings that are "Two-in-One," complex systems in which consciousness forms the body and the body forms consciousness.

As a scholar of religion and a practicing contemporary Pagan, I am sympathetic with Kripal's arguments. It is part of my community's religious practice to seek out mystical experiences and use them to become more compassionate, more effective, and more deeply connected to other people and the environment. American society at large, however—influenced as it is by secular materialism—is often skeptical, even dismissive, of mysticism. Mutants and Mystics' case against pure materialism is simple: no matter how beautiful, transformative, or liberating mystical experiences may be, materialism struggles to explain them as anything other than brain malfunction. Since paranormal experiences are widespread—one might even say a "normal" part of the human condition—classifying them as illness is unsatisfying at best.

On the other hand, I find myself uncomfortable with Kripal's reluctance to pass judgment on how paranormal experiences are used. Chapter 7 of Mutants and Mystics deals with Whitley Strieber, a science fiction author who claims to have been repeatedly abducted by strange "visitors." Kripal acknowledges Strieber's claim that he was "raped" by the visitors in a procedure that left him with rectal pain and symptoms of post-traumatic stress disorder. To help the reader understand how Strieber came to find his visitor encounters meaningful, Kripal compares Strieber's experiences with tantric encounters with dark goddesses. Without significant knowledge of tantric mysticism, however (and perhaps even with it), it is unclear how an experience that produced PTSD could be desirable or good. Strieber himself ultimately seems to have found them transformative (or at least commercially viable). Nevertheless I feel a lack of healthy skepticism here, as Kripal gives the reader no real model for "testing the spirits," as it were.