Mutants and Mystics: A Book Excerpt

But equating the Superman, much less the superhero, in toto with fascism or any other political ideology is, at best, a half truth and, at worst, a gross misrepresentation. To begin with, Nietzsche was not a Nazi, and he despised the anti-Semitism, racism, and nationalism that he saw around him: he would have hated Hitler. It was his sister who later misrepresented him to the Führer and the Nazis. His concept of the Superman, moreover, is complex, undeveloped, and by no means clear. What is clear is that the men who created Superman were Jews, as were most of the movers and shakers in the early comic-book industry. And key superheroes, like Captain America, were explicitly and consciously created to fight Hitler, not sing his praises. Finally, the roaring success of the earliest American superhero comics is intimately connected to the GI's who fought the Nazis on the European front and took their comics, Superman and all, with them, too often to their own gruesome deaths. When the moral courage of World War II was no longer needed on the European front, the superheroes simply went away. To equate Superman and the superheroes with fascism, then, is a precise reversal of the truth.

There is also the deeper historical fact that the idea of a superhuman is finally an ancient religious trope, not a political, American, or even especially Western one. Indeed, we could easily trace the notion back to what many believe to be the "first" and most primordial figure of the history of religions: the shaman. The shaman's mystical calling through an initiatory crisis, often around puberty (mental illness, anomalous sexuality, near-death experience via visionary dismemberment or descent into the underworld, lightning strike), and subsequent magical powers (clairvoyance, soul flight, luminous energies, the acquisition of animal languages, magical battle with demons and black magicians) look a lot like our modern superhero myths. Numerous other examples, moreover, could easily be found in the history of Western mystical literature, where notions of the Divine Man abound, from Christianity's famous man-god and the Divine Intellect (nous) of the philosopher-mystic Plotinus through Goethe's figure of Faust to Ralph Waldo Emerson's Oversoul and hymn to humanity as "a god in ruins."

Similar notions of humanity's secret identity can easily be found in Asia as well. In ancient and medieval India, for example, we encounter the lore around the Siddhas or "perfected ones" of the Hindu, Buddhist, and Jain traditions and the literally towering figures of Jainism (portrayed still today in immense multistory-tall standing stone figures), whose supercosmic conception of the human form and its siddhis or "perfected powers" make almost anything in the superhero comics look downright banal. Indeed, one such founding Jain teacher is known as Mahavira, literally, the "Great Hero," or, with just a little spinning, the "Superhero."

Closer to the present, an Indian freedom fighter turned spiritual teacher by the name of Aurobindo Ghose taught an "integral yoga" that combined evolution and Indian philosophy. Aurobindo believed that such a yoga would eventually conjure a superconsciousness that would "descend" into this world in order to integrate the upper and lower worlds and finally enable humanity to realize its own inherent divinity. He named this the Supermind and suggested that it would descend to help evolve a new "supernormal" species of "gnostic beings" that he collectively called the Superman. Yes, that's right: the Superman. Aurobindo, of course, was well aware of Nietzsche's earlier expression, and he meant something entirely different by his own: he meant a humanity that has taken full possession of its spiritual nature, a supernature that includes all sorts of psychical powers (the siddhis again), with which Aurobindo personally experimented and then classified and cataloged with incredible precision in his yoga journals. Aurobindo, in short, was writing out and practicing the Superman a good two decades before Siegel and Schuster came on the scene in 1938.

And on and on we could go through culture after culture. So, no, the general idea of a superman is not new, and no, it has no necessary connection to Nazism, or any other political or religious system. Of course, the American Superman displays his own nationalist dimensions. All that red, white, and blue works on many levels, including the obvious and repeatedly stated one of representing "truth, justice, and the American way." I am not denying the obvious. I am simply suggesting that there is also a "secret life" to Superman that extends far, far beyond his latest incarnation and "descent" (or crash landing) into American pop culture.

And there is more. In a pattern that is seldom fully appreciated, Siegel and Schuster's Superman is closely linked to the mytheme of Mutation. Hence Superman's early epithet as "The Man of Tomorrow," which, of course, suggests that Superman is functioning as a model for the future evolution of human nature: basically, Superman is us from the future. Hence on the very first page of Action Comics #1, we read that the alien child's "physical structure was millions of years advanced." We are also treated to "A Scientific Explanation of Clark Kent's Amazing Strength." The latter two frames employ the examples of the ant, which "can support weights hundreds of times its own," and the grasshopper, which "leaps what to man would be the space of several city blocks," to make its case (the early Superman could not literally fly; he leapt, like a grasshopper). To extend our reading now, we might say that the genre of the modern superhero begins with the trope of the Alien from the Occult, who is compared to a super-evolved Mutant Insect as a sign of the Future Human. 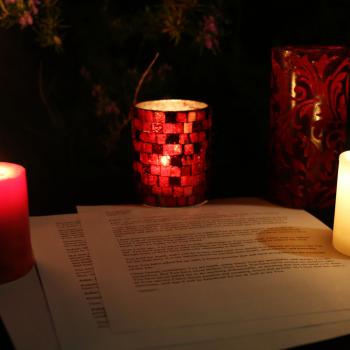 A Ritual of Oathtaking
John Beckett
3 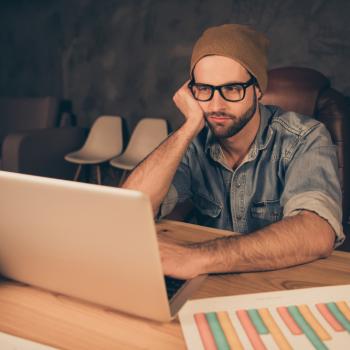 Study Finds Link Between Evangelicals and Google Searches for a Bigger Penis
Hemant Mehta
Get Patheos Newsletters
Get the latest from Patheos by signing up for our newsletters. Try our 3 most popular, or select from our huge collection of unique and thought-provoking newsletters.
From time to time you will also receive Special Offers from our partners that help us make this content free for you. You can opt out of these offers at any time.
see our full list of newsletters
Editor's picks See all columnists