Not So "Courageous" on the Environment? 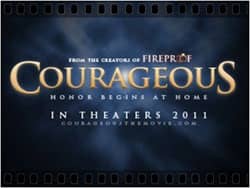 The film Courageous is an admirable effort. Produced by an offshoot of Sherwood Baptist Church in Albany, Georgia (population 77,000), the film has made folks in Hollywood take notice. It was the top new film for its September 30 opening weekend, has gone on to gross well over $20 million, and it's still going strong—proving even more financially successful than Sherwood's last flick, the pro-marriage Fireproof. Not bad for a film filled largely with amateur actors and made on budget of just $2 million.

Don't expect any Oscars for its acting and screenwriting, but with so many mediocre movies out there that promote terrible values, I see nothing wrong, and a lot right, with a mediocre movie pitching a very important message about taking fatherhood seriously. Kudos to Sherwood Baptist and director/associate pastor Alex Kendrick for their heartfelt effort, and for using the profits to do things like giving $100,000 to support Southern Baptist missionaries.

But I do have one small bone to pick with Courageous. In morality play style, the storytelling is not subtle. There is little doubt (even on topics only tangential to the central theme) on what the filmmakers think is worthy of praise, whether it be big trucks, homeschooling, or Chick-fil-A waffle fries (hard to argue with them on that one). But the sledgehammer-style of the morals presentation isn't my beef—all right, maybe it's a side of beef, as I did suffer a few cringes and eye-rolls along the way. Nevertheless, my nit to pick is not with the messages Kendrick and company chose to hammer home, but with one that clearly wasn't on their radar screens at all.

In an early scene, our struggling dads talk life over a manly backyard cookout. Twice we watch as the tension is broken with a long distance trash shot, once with an aluminum soda can and a second time with a plastic water bottle—both easily recyclable items. There are no cheap laugh lines at the expense of tree-huggers, but more disturbing to a Southern creation-care type like me is the impression that it wouldn't occur to these characters (or these faith-based producers) to do anything else with their garbage. (There are actually multiple public recycling centers in the Albany area that would have gladly taken the two items off their hands.)

Yes, it's a small thing, but in a film that loudly preaches the importance of doing the big and little things of fatherhood well, it's a shame that taking care of the physical world that their sons and daughters will inhabit isn't even in the picture. As Proverbs says, "A good man leaves an inheritance to his children's children," and that includes clean land, air, water, and forests. The fathers of Courageous are instead just leaving another unthinking addition to the local landfill.

Like faithful fatherhood, creation stewardship is a neglected issue that the evangelical church needs to stand up and firmly address. With the success of Courageous and this congregation's righteous zeal for, as their website proclaims, "changing the world from Albany," undoubtedly another film is coming to a theatre near you. I wonder if Sherwood Pictures is taking suggestions for its next venture? That might be pushing it, but heck, I'd be happy just to get a recycling bin into the credits.