November 17, 2011 by T. Thorn Coyle
"Like" the Patheos Pagan Page on Facebook to receive today's best commentary on Pagan issues. 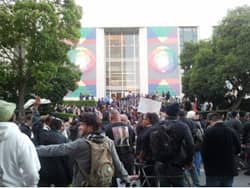 Occupy has captured the attention, the minds, and imaginations of people all over the world. This is not a re-run of what have become standard American Liberal tactics: some marching in the streets, political lobbying in a system increasingly stacked toward those with deep pockets, and a dash of prayer.

I stood with many hundreds of others Monday night, first at the Oakland Main Library and later in the re-opened Oscar Grant/Frank Ogawa Plaza for General Assembly after the second raid on the Oakland encampment. While I did not agree with everything I heard, it felt heartening to see the anarcho-democratic process at work amongst people who have likely never had consensus training in their lives. Because of Occupy, people around the country are getting a taste of consensus process and true participatory democracy.

I have great hope that more direct involvement in participatory politics will evolve over the next decade. Our system, as it stands, is broken and barely workable. At Occupy General Assemblies, at the Oakland General Strike November 2, and during meditation sessions in front of City Hall, I catch the scent of the winds of change. As war correspondent Chris Hedges writes in a heartfelt piece: "This is the beginning of the end." After every ending, comes a chance for something new.

I returned home to frantic twittering of the raiding of Zuccotti Park in New York and the barring of the press. The destruction of the camp was on, as it had been in coordinated strikes across the country, in Oakland, Denver, Portland, and other cities. This alone is proof that camps are important. Those who currently hold power feel threatened enough to use force and violence to displace people, dismantle their kitchens and libraries, and hide from reporters while they do so.

Occupy has deep roots and far-reaching branches. Though reminiscent of the Diggers of the 1600s, of the Paris Commune, and the Haymarket uprisings, it also looks like something we have not seen before. Why doesn't it yet have a list of achievable goals? Because it is working on the long-term process of educating citizens and re-making a country. That is not done in under two months, not when it has taken 200 years for things to go awry, and certainly not when we need to retrain ourselves toward a new system of social organization and the possibility of real justice. Occupy recognizes the importance of conversation, teaching, and time.

While I would like to see General Assemblies accept the mantle of non-violence, I comprehend those who say we don't have a working definition of what violence is. Critiques of violence in Occupy usually center around a few smashed windows—a tactic I find puerile—while failing to note that big banks and multinational corporations commit substantial violence against Earth and humans daily. Children are chained to machines. Water is poisoned. Homes are stolen. A smashed window barely compares. Yes, I feel we would be better off, as one speaker at Monday's GA said, to "fight violence with non-violence," but I'm not scrapping the movement for lack of consensus on this point. It takes time for individuals to step forward into their power. It takes time to build leaders. We need to take that time, or nothing will ever change.

About T. Thorn Coyle
T. Thorn Coyle is an internationally respected visionary and teacher of the magical and esoteric arts. The author of Make Magic of Your Life, Kissing the Limitless, and Evolutionary Witchcraft, she hosts the Elemental Castings podcast series, writes the blog Know Thyself, and has produced several CDs of sacred music. Follow her on Twitter and Facebook!