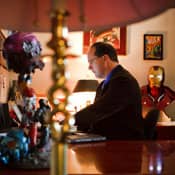 In his new book, Mutants & Mystics: Science Fiction, Superhero Comics, and the Paranormal, Jeffrey Kripal delves into the wildly creative world of superheroes and sci-fi creatures, and finds that their creators and fans express paranormal experiences ignored by mainstream science. Kripal, the Professor of Philosophy and Religious Thought at Rice University, is no stranger to comingling with the mystical and mysterious. His teaching in gnosticism, esotericism and mysticism, along with his work on books such as Esalen: America and the Religion of No Religion and Authors of the Impossible: The Paranormal and the Sacred, find him regularly probing the outer limits of consciousness.

We invited Kripal to answer a few questions about Mutants & Mystics and the conversations he hopes it inspires. For more discussion on the book, and to read an excerpt, visit Patheos Book Club.

What possessed you to write this book at this time?

Mid-life regression. It was either this or a Harley.

No, seriously, it all started with my 2007 history of the human potential movement (Esalen: America and the Religion of No Religion) and my growing astonishment that the evolutionary mystical theology of this West Coast movement—whose central premise is that mystical, psychical, and paranormal openings are "evolutionary buds" of our evolving supernature—is basically identical to the East Coast mythology of the X-Men, which appeared just a few months later on the opposite coast. I became fascinated with this West/East Coast historical and cultural "resonance" and wanted to see if it played out in any way in the mystical lives of the authors and artists who helped create the modern mythologies (since I had already written about the human potential figures). It did.

I want the book to challenge the common assumptions people make about profound, life-changing, mind-blowing mystical experiences—that the really good stuff lies safely in the past, preferably in another language; that these events are always coded in religious or theological terms; that these have nothing to do with psychical phenomena; that UFO or alien frames automatically translate into "fraudulent" or "crazy," etc. More positively, I want to suggest that anomalous religious experiences are often closely linked to artistic and literary genius, and that paranormal events often act and look like living narratives or stories. Most simply put, I want to revisit the notion that writing and reading are essentially magical activities.

Who is your ideal reader?

Someone who (a) has undergone a profound paranormal event and (b) is obsessed with science fiction or superhero comics and does not know why.

What do you see as the relationship between traditional religion and the paranormal? Do you think religion restricts "access" to the paranormal, and to what effect?

I see paranormal events as "little miracles in the making." They are not quite "miraculous," for religious miracles act as "signs" of some greater truth that the tradition holds. Miracles act to "prove" a particular revelation. But what do paranormal experiences prove? Well, nothing yet, as their mythical and ritual frames, their revelations, are still developing. I think we should be looking very, very closely at these sorts of wild, untamed experiences, as what I think we are looking at is religion in the making before it becomes religion.

In terms of the religious resistance and the gross demonization of the paranormal, even this makes sense, since if paranormal events are basically pre-religious revelations, then they also likely challenge the existing revelations. They are, if you will, the future of revelation. One can well understand, then, why they would be resisted. That too needs to be queried, needs to be understood. We also need to take very seriously that individuals often experience a paranormal event in profoundly negative terms, as "demonic." The sacred is not the good. The sacred can be positive or negative, or both at the same time.

Oh, I have written too many books and read too many stupid reviews to be naïve about changing anyone's mind. I'm not sure people change their deep views so easily. I think worldviews and metaphysical assumptions—which is what I am really going after here—are held largely on an unexamined and inaccessible level, "unconsciously," as we say. What I do think a book like this can do is provide a truly open mind with better frameworks to take seriously something the person wanted to take seriously anyway, but couldn't. I think this book, if read in conjunction with my earlier book Authors of the Impossible (which is essentially an intellectual history of the paranormal and the psychical), can do that. I hope so anyway.