"Pray that God Would Hear the Cries of His People"

Editor's Note: Patheos is proud to publish the second part of Greg Metzger's interview with the Christian activist Ryan Boyette. In Part One, Ryan spoke of his personal connection to Sudan and explained the plight of the Nuba Mountain people of Sudan. In Part Two, below, Ryan explains how he and his Sudanese partners have utilized state-of-the-art technology and raw courage to raise awareness around the world about the atrocities being committed by the Sudanese government of President Bashir. 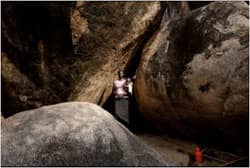 What new methods have you and your colleagues been using to document the human rights crisis in the Nuba Mountains?

I am the only American on a team of citizen journalists. The other thirteen members are native Sudanese. They go out to different locations that are or have been under attack. They bring back reports, interviews, photos and videos of events that have taken place from all over the state of Kordofan.

From there I compile the information and send it out to different governments, media, and advocacy groups. I have also been working in collaboration with the Satellite Sentinel Program. I give them detailed information about what is happening on the ground and the Satellite Sentinel Program then uses that information to pin point where different events take place and use satellite imagery to show and provide further evidence to the events that are taking place in Southern Kordofan of Sudan.

Ryan, some people are accusing you and your partners at Sentinel and elsewhere of spying on Sudan. How do you respond?

Yes, some people are saying this is spying on Sudan. But in reality it is not spying. This work is not being done secretly for any government. The Sudanese Government would like this information to remain a secret because they would like to continue their campaign of terror on the people of Southern Kordofan, Blue Nile and Darfur. But these atrocities are not a secret to the millions of people who live in these states—and they're no longer a secret to the rest of the world. We are simply providing information to the world for the Sudanese people that are suffering great atrocities and oppression from their government. We openly provide the information to the public for every one in the world to see what the Government of Sudan is doing to its own people. We also show that, despite these atrocities that are taking place on a daily basis, there is very little response from the United States or the international community.

What do you think the broader international community should be doing in response to the plight of the Nuba Mountain peoples?

First, stop engaging Bashir as if he is a man a good character and would actually hold to any agreement that might be made. For the past nine years that I've lived in Sudan, I've constantly seen the deceptiveness of the Bashir regime. They sit down with United States and United Nations officials and through their tea-drinking political talk they convince them that they are a regime that actually will assist or are assisting their people. They're not. The Bashir regime is deceiving the US and the UN. From the time Bashir has taken power, he has destroyed his country and his own people up until today.

Some may say that he and his regime help establish the Comprehensive Peace Agreement, but he only acted on the CPA because he was forced to do so, and even when he was establishing the CPA he was displacing and killing many of the people of Darfur. Bashir will only do what ever benefits him at any particular moment, without consideration for his people.

Second, stop the Bombing. Mig Fighter Jets and Antonov Bombers are dropping bombs on the people of Southern Kordofan and Blue Nile every single day. SPLM-N Soldiers are not being targeted. Civilian populations are being targeted. This is proven by the number of causalities and wounded, civilians and soldiers. Many more civilians have been wounded and killed by these bombings than soldiers. The United States has the ability to make a threat, destroy several jets and planes on the ground, and establish a no-fly zone. The US has chosen to do nothing even though we have a moral obligation to act.