Prayer Before Battle in the Leyte Gulf

November 11, 2011 by Marcia Morrissey
"Like" the Patheos Catholic Page on Facebook to receive today's best commentary on Catholic issues. 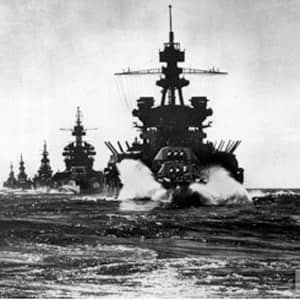 Some good friends of ours, Michael and Jolinda, offered to drive me to a meeting when Ed was out of town a few weeks ago. They had just returned from a family gathering to celebrate the 60th wedding anniversary of his Uncle Syl (Sylvester) and Aunt Gerry. As we drove along, they related to me the wonderful family event they had just experienced, and that they had made tapes of Syl and Gerry telling stories of their long happy life together.

One story gave me chills as Michael told it. I asked if this story was known, and he didn't think it was, except by those like Sylvester, who were there. Here Michael shares with us the amazingly providential event that Sylvester experienced in October 1944:

My Uncle Sylvester was assigned to a cruiser in the Pacific. It was in the battle of Leyte Gulf that this story takes place.

The Battle of Leyte Gulf is by some criteria, the largest navel battle in history. The Japanese were intent making one last large effort to stop the US and Australian forces from cutting them off from the natural resources of Southeast Asia. If they could strike a decisive blow, the Japanese war machine could continue.

Part of the Japanese's strategy was to feint a small force to the north of the Philippines and draw Admiral Halsey's forces into a vulnerable position.

Syl was on a destroyer when the main Japanese force came through the Leyte Gulf, catching the US forces by surprise. When this small token fleet radioed Halsey for help, the response was that they were on their own. These ships knew that they were hopelessly outclassed and that they had to stand and fight. Syl was in the destroyer's ready room when this information was related. They were all talking about what they could possibly do when the messenger from the radio room said, "I don't know about you but I'm gonna get down on my knees and pray."

That small task force of ships ended up attacking the Japanese fleet so ferociously that it was thrown into confusion and halted its advance. Ultimately the US forces prevailed and the Japanese fleet was never able to mount another offensive attack again. The outcome of the war was now all but certain.

A wonderful story for Veterans Day, and a reminder of the efforts and sacrifices all our military make for our liberty and freedom. Michael's family is blessed to still have Sylvester, and to be able to hear stories like this.

Today we remember in a special way all veterans-past and present; we set the day apart to honor our servicemen and women, but they should be prayed for, every day. Each evening when Ed and I pray together we include those men and women who serve to protect us, and for their families as well.

God bless America, the land of the free, and the home of the brave. Let us never take it for granted, or the service of our veterans. God bless and keep them all.

Marcia Morrissey's column will change from weekly to bi-monthly. It will appear on Fridays here at Patheos.