When Thanksgiving Is Filled with Turkeys

November 22, 2011 by James Martin, SJ
"Like" the Patheos Catholic Page on Facebook to receive today's best commentary on Catholic issues. 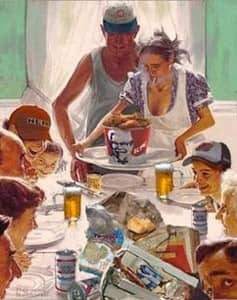 Everyone from your know-it-all neighbor to your more-processed-than-you-are therapist to your holier-than-thou pastor will tell you that the holidays can be stressful times.

Even though you roll your eyes after hearing this for the umpteenth time, you know they're right. Why? Oh, for about a billion reasons: the need to travel long distances frays nerves; the increasing pressure to buy, buy, buy more gifts strains wallets; simmering family conflicts that explode over the slightest slight lend an undertone of discord to gatherings; blotto coworkers bellowing insults at boozy parties means a tense office environment the next day; and frustrated expectations that Thanksgiving/Christmas/Hanukkah will be "just like it was when I was growing up" mean that many find the holidays a big fat letdown.

I didn't think so.

While the holidays—loosely defined as the time between Thanksgiving and New Year's Day—are filled with many graces, they can be stressful. So how can you survive them?

With some humor. Specifically, by laughing at three things:

1) Laugh about the craziness. Got a crazy family who always argues about the same thing every single time they get together? "I CAN'T BELIEVE YOU BROUGHT THAT UP AGAIN!" Don't get angry; get perspective. Unless you're the Messiah and can work miracles, you're probably not going to change them. So stop trying. You're driving yourself nuts. You can be open and loving, but you can also be realistic.

Instead, find a friend with whom you can laugh about the general craziness. Tell him some of the nuttier things and let off a little steam. Don't laugh at your family or people in the office; laugh about the situation. It will give you a break and allow you to approach the group with more patience and, yes, compassion.

Be compassionate to yourself, too. I once suggested to a friend that rather than berating himself for getting bothered by his family (he was bothered that he was bothered) he should say to himself, "I deserve a medal for putting up with this!" The next time I saw him he laughed and said how much that bit of humor helped. "By the time New Year's came around," he said, "I had awarded myself three medals—and a Purple Heart!"

2) Laugh at things that are supposed to be funny. There's plenty of funny holiday-themed humor out there. If you're not tickled by Grandma Got Run Over by a Reindeer (which I am not) there's always A Christmas Story, ("You'll shoot your eye out!"), which airs on TV 24/7 from Thanksgiving to Christmas, so you've got no excuse not to smile at least once in November and December.

Even better than the movie are the original stories on which the film is based, written by the humorist Jean Shepherd. Pick up one of his books for a laugh: one of my favorites is In God We Trust, All Others Pay Cash, which includes the Christmas tale at the heart of the movie: "Duel in the Snow, or Red Ryder Nails the Cleveland Street Kid."

Still not amused? Check out Just Friends, an underappreciated (and warning: racy) Ryan Reynolds/Anna Faris Christmas-themed movie that I find hilarious. Or try Mr. Bean's Christmas, which is the funniest thing on YouTube. Oh, you don't think so? Then you're wrong, and I don't want to be friends with you any more.

While you're at it, try laughing about things that aren't supposed to be funny but are: like the ridiculous consumerist ploys to get us to part with our money every November and December. Macy's has an annual slogan for the holidays. Know what it is? "Believe." If that's not the stupidest thing I've ever heard, I don't know what is. Believe? Believe in what? (I doubt they're referring to the Incarnation.) It's okay to laugh at such absurdity. Why? It's ridiculous—literally, able to be ridiculed. To that end, seen the "Lego Advent Calendar" yet?

3) Laugh at yourself. As Jesus said to the disciples, "Get over yourself!" (Well, he should have said it.) Stop taking yourself so seriously. Your coworkers thought that your Christmas tie was ugly? Maybe it is. Someone didn't like your "Famous Mulled Wine" or your "Christmasy Ginger-Pumpkin Nutbread" handed down from your great-grandmother? Get over it. Life's too short to take yourself too seriously.