Touring with Angels: A Q and A with Susannah Currie 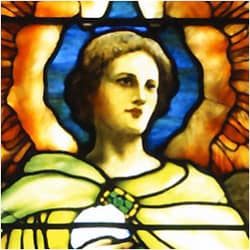 The Reverend Susannah Currie is the executive director of In Company with Angels, the nonprofit organization formed to take seven rediscovered Tiffany angel windows on tour. In this interview, she shares what it was like to see the angels for the first time, what the restoration process was like, and how the angels are inspiring people on their journey.

(Visit the Patheos Book Club to learn more about the book related to this tour: Tiffany's Swedenborgian Angels: Stained Glass Windows Representing the Seven Churches from the Book of Revelation.)

What was it like to see the angels for the first time?

When the crates were first opened in 2001, I was immediately impressed by the intricacy and complexity of the glasswork. When we shined light through them for the first time, to take pictures and make cards as an initial fundraiser, we were all struck by the depth of the colors, textures, and beauty of each window.

What was the condition of the angels after so long in storage? In general, what was involved in the restoration process?

We all were in amazement that they had all remained intact given their forty years in storage, transport from Ohio in a trailer, and the moving done between various locations on the Temenos property once in the hands of the youth group! To begin restoration, we were graced with donations from various individual donors, the Philadelphia Ladies Aid Society, and one significant donation from Ms. Helene Tripier, who asked to remain anonymous until her death in 2011. Art Femenella and Kathy Jordan supervised the restoration work, which required dismantling and cleaning up to seven layers of glass in some places.

Do you have a favorite angel?

Pergamos has always been my favorite angel, I think initially because I love the three-dimensional white stone that juts out from the window. As I have further studied the meanings of the letters to the angels of the churches, I resonate with the call to the church of Pergamos to "do the good that they know." It is my hope that the work of In Company with Angels is a project that fulfills that call with its mission.

Seeing the seven angels in the arrangement displayed at the [current exhibition in the] Taft Museum of Art, I felt that they were in a position very like that of the original church installation. More than at other viewings, in that moment, I felt that their beauty and power focused on the point of entry into the room, where they met each of us as we entered as both a greeting and a challenge. It was overwhelming, and I needed to sit down as my knees buckled at the sight.

In what ways have the angels inspired people? Are there any special stories that you know from people who have seen the angels during their travels?

This is the most gratifying part of watching the In Company with Angels exhibition travel and touch people. More than one photographer has contacted us to capture their images; composers have felt music flow into them, inspired by the angels; meditation groups are forming using the images and music as a focus; craftspeople are creating merchandise to share the images with the world. The most touching comment that I remember was the written reflection from a grandmother who visited the exhibit with her granddaughter and shared that it helped them to begin to talk about heaven! Now that's the kind of response that warms a minister's heart!

How does the Foundation's new book Tiffany's Swedenborgian Angels tie in with the traveling exhibition?

The beautiful book Tiffany's Swedenborgian Angels gives history, context, and spiritual interpretation for those interested in the deeper story. In Company with Angels is delighted to have it travel with the exhibit and provide readers with the Swedenborgian significance that inspired their creation.

How was the idea for the book formed?

Reverend Carla Friedrich has been using canvases of the angel images in the San Diego Church for quite a while and had been talking for a while about wanting to write about the Swedenborgian significance of the angels. When Joanna Hill joined the Swedenborg Foundation staff, and expressed a similar interest, I had the honor of introducing them to each other over lunch and they began the project's brainstorming. I later found out that after I left, that first lunch lasted hours!

Where will the angels end up? Is there a plan yet for a permanent installation?

The Swedenborgian Church at Temenos, which owns the windows, has no current plans beyond the traveling exhibit. In Company with Angels will continue to lease the windows for touring for the forseeable future.