December 20, 2011 by Joseph Susanka
"Like" the Patheos Catholic Page on Facebook to receive today's best commentary on Catholic issues. 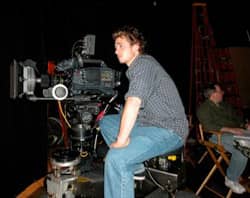 As our own Frank Weathers can attest, the fundraising and filmmaking worlds collide with often-frustrating regularity. For me, however, working for a fledgling Liberal Arts college in the beautiful mountains of Wyoming, fundraising is about as far from Hollywood as one can get.

This past week was a welcome exception to the rule. After years spent as a mild-mannered development officer by day and a masked movie-reviewer by night, I had the opportunity to meld my professional and Patheos life with the release of Wyoming Catholic College's newest promotional video.

Entitled "Wisdom in God's Country," the 7-minute piece was created by Grassroots Films, the Brooklyn-based studio behind the USCCB's Fishers of Men vocational video, the arresting "Catholic Vote" ads, and the award-winning The Human Experience. Working on the film was a blast—yes, standing on a mountaintop while a chopper circles 'round is quite a rush. And yes, I can now confirm that I'm a bit afraid of heights. But the best part of the experience was the change to get to know the folks at Grassroots who were responsible for the final product—a young, vibrant group of artists whose talents (and passion for their work) have placed them at the forefront of the New Evangelization here in America.

I recently had the opportunity to talk with them about their work, their time in "God's Country, Wyoming," and what the future holds for Grassroots.

Grassroots' journey into the filmmaking world was a highly unusual one. How did you find yourselves here, and what role has Providence played in your odyssey?

JOSEPH CAMPO, EXECUTIVE PRODUCER: Grassroots Films started out as an idea born from Father Benedict Groeschel's Saint Francis House. The house (where I have been the director for 20 years) is a group home for young men who need a second chance in life. We made our first film about the home, and all of the guys who were residents participated in the production. It really just took off from there. Each person involved lends their God-given talents and abilities to the productions and I believe that is what makes our films so artistically unique.

The doors have always found a way to open for us to work on new projects. The Human Experience, for example, came together in a rather natural way.

What was it like to shoot, edit, release, and promote a grassroots phenomenon like The Human Experience? Were you surprised by the response? What is the greatest lesson it taught you as filmmakers?

MICHAEL CAMPO, WRITER/PRODUCER: Making the film was a "human experience" in itself. This wasn't your average film! Meeting real individuals in real situations was not only eye-opening for us but life-altering as well. I am excited about the response the film has received because it shows that there are people out in the world who care about these issues and desire to make a difference. The greatest lesson I have learned is the importance of faith, family, love, and hope. From the people we have met along the path, these four elements were the fundamental ingredients to living life, and I try to never forget the importance of each.

JEFFREY AZIZE, LEAD ACTOR IN THE HUMAN EXPERIENCE: I've always wanted to be a part of something remarkable and original. The Human Experience became that adventurous joy within my heart and soul. Many of the people whom I met while filming have endured extreme hardships in their lives, yet the one thing that they left me with was the belief that we all must ultimately love one another in order to make this world we live in a better place.

This was the first video you did for an educational institution. What was it that drew you to the WCC project in particular?