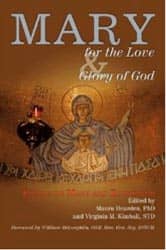 As a young girl, I somehow got the impression that Catholics held the monopoly on the Blessed Virgin Mary. After all, we're the ones who set aside feast days like today, the Solemnity of the Immaculate Conception. As a kid, some of my local Protestant friends scoffed at Mary, thinking erroneously that we Catholics worshipped her, or somehow deified her. As it turns out, both points of view were suffering from a profound tunnel vision.

How much I had to learn, both of Mary, and of the genuine esteem and interest that other faith traditions held for her, whose life and destiny exemplified both the love and the glory of God.

The most Blessed Virgin Mary was, from the first moment of her conception, by a singular grace and privilege of almighty God and by virtue of the merits of Jesus Christ, Savior of the human race, preserved immune from all stain of original sin.(Pius IX, Ineffabilis Deus, 1854)

But the seeds of this dogma are found much earlier than 1854. In fact Pope Pius IX was just affirming what was already grounded in Sacred Scripture. To begin with, there is the familiar story of the Annunciation to Mary in the first chapter of Luke's gospel.

Mary's person is declared to be full of grace in this verse. She is singled out from the rest of humanity. Her ontological nature or her being—her very existence—is full of grace according to God's Word on the lips of the Angel.

Mary's Immaculate Conception reveals the love and the glory of God, and her being and magnificent life is God's masterpiece in Creation. Mary is the recipient of God's extraordinary love and highest praise as shown through the message of the Angel.

What is accomplished in Mary points to the glory of God. Her role in human history, and ultimately, salvation history, has meaning for us all. Her life is intimately acquainted with every member of the Trinity: Mary is the faithful Daughter of the Father, the loving Mother to the Son, and the fruitful Spouse of the Holy Spirit.

What's more, Mary's way of life is a beacon for many people, even those who do not ascribe to the Catholic Christian tradition. She is a spiritual mother to millions of children around the globe: Roman Catholic, Eastern Orthodox, Protestant, and Muslim.

One example of this blessedness of the Virgin Mary is found in the conversations and ongoing work within the Ecumenical Society of the Blessed Virgin Mary. Its mission brings together scholars, clerics, and laity interested in finding Mary as point of union and connection, rather than division.

In the book Mary, For the Love and Glory of God: Essays on Mary and Ecumenism(AuthorHouse, 2011),one finds a variety of essays by scholars within the ESBVM, that were presented at its International Congress held in Pittsburgh in 2008.

I recently spoke to co-editors Virginia Kimball, STD (a member of the theology faculty at Assumption College, and President of the ESBVM-USA), and Maura Hearden, Ph.D. (a member of the theology faculty of DeSales University). Both were enthusiastic in reaching out beyond their scholarly circles with the message of Mary as a rallying point for God's children on earth.

Dr. Virginia Kimball notes, this book represents a wealth of wisdom, the latest in a series of books from the Ecumenical Society of the Blessed Virgin Mary, founded in the wake of Vatican II.