Book Excerpt for "A Magical Tour of the Night Sky" 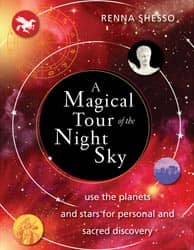 Chapter 4: The Moon—Queen of the Night

She with her winding and turning in many and sundry shapes, hath troubled much the wits of the beholders...

In ancient Egypt, a battle raged between the gods. In the twenty-eighth year of Osiris' reign, His jealous brother Set attacked Osiris, sealed Him in a coffin, and tossed it into the Nile, which carried it away. Isis—Orisis' wife and a sister to both brothers—found the coffin, and released and revived Osiris.

But Set wasn't finished. Again He attacked. This time, He dismembered Osiris, scattering the fourteen pieces throughout Egypt. Again, Isis set out to rescue Her husband. She found the lost pieces—everything but Osiris' phallus. Never fear: with Her magic, She crafted Him a new one. Then She reassembled Osiris and again recalled Him to life.

Then Isis took a portion of Osiris' renewed life-essence into Herself: She coupled with Osiris and became pregnant with His child.

Thus Horus, the divine child of Isis and Osiris, was born. He was as wide-seeing as the high-soaring falcon that is His symbol. The Sun is His right eye and the Moon His left. But all too soon, Horus was locked in battle with His uncle, Set. In their struggle, Set tore out Horus' left eye, ripped it apart, and scattered the small pieces far and wide.

Now Thoth came to Horus' aid. A god of writing and mathematics, a counselor both clever and wise, and a magician in His own right, Thoth found the pieces of Horus' Moon eye and reassembled them. Then, since Thoth also understood the healing arts, He healed—made whole—the left Eye of Horus. That eye became known as the oudjat, a sign of wholeness and healing, and of the Moon itself (see figure 76).

Sunshine is wonderful in its light and warmth, and the beauties of sunrise and sunset can be breathtaking. But moonlight—ah, moonlight is where magic happens.

Humans have special connections with the Sun and the Moon, far beyond any familiarity we may come to have with the other planets. We see the Sun and Moon daily, or nearly so. Both are huge and obvious in the sky. Even the smallest children relate to the Moon, its changing shape—round like a ball, curved like a smile—and the softness of its light. The words we have to name the Moon tend to be sweet in the mouth and soft on the ear: luna, månen, lua, ooljee, mesíc.

Thanks to their perceived parity in size, the Sun and the Moon are often cast as sister and brother, siblings, spouses, or lovers who constantly meet and depart from each other. Like the flip sides of a coin, we see the Sun by day and the Moon by night. At least that's what we think we see. A surprising number of adults have told me: "The Moon's not up in the daytime." But half of the time, it is.

The relationship between women and the Moon is ancient. The menstrual cycle is one obvious bond, often moving with the Moon in its rhythm. In folk and metaphysical terminology, the menstrual cycle is referred to as a woman's "Moon-time." The ocean tides respond to the gravitational pull of the Moon, and the female body's inner ocean responds to the Moon as well. Early in human history—before all the artificial lights that keep our nights from being truly dark—women may have ovulated near the Full Moon and bled near the New Moon. Many women find their cycles return to this rhythm if they begin sleeping in total darkness, broken only by the Moon's own Full Moon brightness.

In pregnancy, too, we find strong Moon associations. A woman's womb fills with a growing infant just as the Moon waxes into fullness, then "empties out"—of light, of birthed child. There's timing, too. More births are said to take place on and near Full Moons, with New Moons being the next most common time.

The "ages" of the Moon are also significant—Maiden, Mother, Crone. In lunar terms, a woman's life is echoed by the lunar phases of Waxing Crescent, Full Moon, and Waning Crescent. While this life-journey metaphor can be applied to men as well, it doesn't resonate emotionally as such an intuitive fit.

For all humans, the Dark Moon—when the Moon is unseen, conjunct the Sun—is metaphorically tied to both death and rebirth. A few days after vanishing in the east at sunrise, the slimmest New Crescent reappears in the western sky at sunset. Conjunction with the Sun makes every planet invisible when its turn comes, but the Moon becomes invisible far more often than any of the other planets because it's closest to the Earth and orbits us so rapidly. Seeing the Moon vanish and then reappear each month made it a metaphor for ideas about reincarnation and resurrection.