What Child is This?: Reflections on the Christmas Lectionary

After a lifetime of listening to and singing Handel's ubiquitous "Messiah," with its rollicking chorus based on Isaiah 9, and after endless Nativity pageants, in bathrobes and out, it becomes nearly impossible to imagine that the words of the ancient prophet did not, in fact, have Jesus of Nazareth directly in mind. However, what he apparently did have in mind, as much as we may be able to recover it, led many early Christians to find in his words indications of what they hoped Jesus of Nazareth had come for them to be and do. So, just what did old Isaiah mean when he uttered those now immortal words, "Surely, a child has been born for us, a son given to us" (Is. 9:6)?

As usual when we read the Bible, context is crucial. Scholars are quite argumentative about the historical time frame of this oracle from Isaiah. Coming as it does right after a quite literal announcement of people in darkness (Is. 8:22 uses three different Hebrew words for darkness!), and followed by another gloomy claim that YHWH remains furious with God's people (Is. 9:8-17—see especially the terrible words of vs. 17: "everyone was godless and an evildoer, and every mouth spoke folly"), led some scholars to assign the pericope of 9:2-7 to a later, far more hopeful, prophet, who had witnessed the historical demise of the northern kingdom of Israel (ca. 722 B.C.E.) and perhaps even the exile of the southern kingdom (ca. 597-587 B.C.E.). That could be so—indeed I was taught that myself in my long-ago graduate study—but I am now not so certain.

I have come to believe that the ancient prophets of Israel were much more like modern believers than I had often credited them to be. Their faith in YHWH, and in YHWH's connection with the people, was not always so rock-solid as I had once imagined. Just as in my relationship with my God, sometimes I am absolutely convinced that God is alert, alive, and active in the world's behalf. But at other times, just like my forebear Isaiah, God seems to be "hiding God's face from the house of Jacob" (Is. 8:16). Yet, also like Isaiah in that same verse, I can sometimes say, "I will wait for YHWH, who is hiding God's face from the house of Jacob, and I will hope in God" (the whole of Is. 8:16).

Hence, Isaiah 9:2-7 is another burst of energetic faith, exploding in the midst of the hard realities of a people who would rather turn their faces elsewhere than toward the God who has rescued and saved them again and again. Just listen to Isaiah's blast against his people in chapter 8. "Now if people say to you, 'Consult the ghosts and the familiar spirits that chirp and mutter; should not a people consult their gods, the dead on behalf of the living for teaching and for instruction'" (Is. 8:19-20)? Like the first king of Israel, Saul, who turned in desperation to a female medium for guidance because of the apparent silence of YHWH (1 Sam. 28), so Isaiah's own people two centuries on are doing the same thing. Surely, they are still in darkness.

But Isaiah refuses to give in to these foolish impulses to worship ghosts and spirits that chirp strange sounds and mutter dark, unintelligible phrases. Instead, he announces that those same people "who are walking in darkness have seen a great light" (9:2). And just what is that great light? The prophet speaks of "joy," a joy like the joy of an abundant harvest, a joy like the pleasure felt when the spoils of victory have been divided among the victors. This is a joy to match that feeling when oppressors have been defeated, when their yokes have been removed, their shoulder bars have been taken off, their disgusting rods of punishment have been shattered, just as the Midianites were beaten by Israel so long ago, defeated by Gideon, wielding only jars and lanterns (Judg. 7)! This is a joy to match that magnificent scene when warriors' boots and soldier's leather armor, having been rolled in blood, are now burned as fuel for the fire. War has ended, and we are at peace!

But even that does not match the joy now described by Isaiah. "A child has been born for us, a son given to us; authority rests on his shoulders, and his name is called, 'Wondrous counselor, warrior God, eternal father, prince of peace.'" And who is this joyful child of ours? Verse 7 announces that he is author of "endless peace," none other than the next Davidic king, whose function is "to establish and uphold it (peace) with justice and righteousness now and forever" (Is. 9:7)! There is no doubt that this has happened and will happen, because, "the zeal of YHWH of Hosts will do this" (Is. 9:7)! 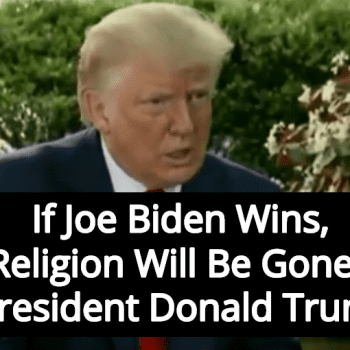 Ex-jailbird Pell: Vatican has swept out 'most, if not all of its crooks'
Barry Duke
3

Psychological Factors That Influence The Spread of Fake News
Matthew
4

A Simple Thought Experiment Defeats Claim that Bible Is Accurate
Bob Seidensticker
Get Patheos Newsletters
Get the latest from Patheos by signing up for our newsletters. Try our 3 most popular, or select from our huge collection of unique and thought-provoking newsletters.
From time to time you will also receive Special Offers from our partners that help us make this content free for you. You can opt out of these offers at any time.
see our full list of newsletters
Editor's picks See all columnists