"Remember to Count Your Pencils": A Reflection on the Penn State Scandal

December 20, 2011 by David G. Moore
"Like" the Patheos Evangelical Page on Facebook to receive today's best commentary on Evangelical issues. 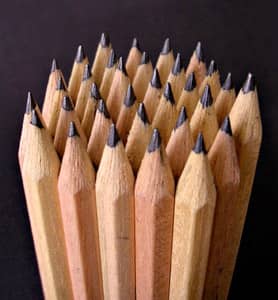 When the Penn State scandal first broke, my initial thought was: "Remember to count your pencils."

My dad worked long hours, and often brought work home. Once I walked into my parents' bedroom and noticed a curious sight. At his desk, my father was carefully counting the pencils before he put them back in his briefcase. I asked him why he was counting the pencils. "These are pencils from work," he explained. "They belong there. I bring them home for things only related to work. When my work-related projects are done, the pencils go back to the office."

This response about the pencils did not surprise me. It was consistent with the overall tenor of his life. For example, when I had just celebrated a birthday that put me in the higher price category for the movies, my father clarified my age to the theater clerk lest he mistakenly charge the cheaper rate.

Fast-forward many years to a Red Lobster parking lot. My elderly dad, mom, and sister were leaving the restaurant after eating dinner. Without warning, a large, athletic male came charging at them. He grabbed my mom's purse and began to wrestle it away. My dad had no time to process what was happening. If he had performed a cost/benefit analysis on a pro-con sheet, he would have determined that it was absolutely ludicrous to intervene. The assailant was much stronger than my dad. The results would certainly not be good. My dad acted in a manner completely oblivious to the consequences. He sought to intervene and got duly beaten for doing so. In fact, his bloodied face and lifeless body made my sister think he was dead. Fortunately, she was wrong. My father is still going strong at the ripe old age of 86. To quote Jesus, my father's "faithfulness with the little things" furnished the resources of strength and character so that he would not cower when faced with a life-threatening situation.

The details of the Penn State scandal are still coming in, so it would not be prudent to pronounce early judgment on certain individuals. The court of public opinion has been tough on Penn State, especially assistant coach Mike McQueary. There appears to be mounting evidence that the proper authorities were not contacted in a timely manner. If it's shown that a bureaucracy of secrecy at Penn State clouded the judgment of many, we ought not be surprised. Bureaucracies are not inanimate. They are comprised of people. Perhaps most in this sordid affair simply wanted to shut up and keep their jobs. The practical ramifications of being a "whistleblower" against a storied football franchise are just too costly for most to play the role Sherron Watkins did with Enron. Power, access, and money regularly trump the good judgment of people in all sectors of life. I have seen it up close too many times, and sadly report that Christians are not immune.

My dad understands where character is forged. It is in the so-called little decisions away from the public eye. Will we cut corners and compromise because it protects our self-interest or will we do that which is right irrespective of the consequences? There are many lessons I have learned from my dad's willingness to protect my mother, but two stand out. First, don't allow difficult consequences to cloud your judgment about what is the right thing to do. Doing the right thing can be costly. Sure, there are times when you might be extolled for your courage, but you may also be maligned as a troublemaker. Don't mind the consequences. Focus like a laser beam on what is right. Second, remember that there really are no little duties. The decisions we make every day in obscurity either strengthen our character or chip away at it. Counting your pencils may seem trivial, but it will create the kind of character that allows you to act courageously when the crunch-time comes.