December 20, 2011 by Max Lindenman
"Like" the Patheos Catholic Page on Facebook to receive today's best commentary on Catholic issues. 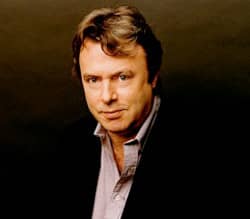 In "Aubade," Philip Larkin, whom the late Christopher Hitchens named as his favorite poet, wrote in the voice of a non-believing sensualist facing death and the extinction of the senses:

This is a special way of being afraid
No trick dispels. Religion used to try,
That vast, moth-eaten musical brocade
Created to pretend we never die,
And specious stuff that says No rational being
Can fear a thing it will not feel, not seeing
That this is what we fear—no sight, no sound,
No touch or taste or smell, nothing to think with,
Nothing to love or link with,
The anasthetic from which none come round

On December 15th, after an 18-month struggle with esophageal cancer, Hitchens himself went under that anesthetic. Since June of 2010, when he first announced his diagnosis, believers of all faiths have been hoping, and of course praying, that the author of God is Not Great would see their particular brand of the light. He didn't. Hitchens died, as people used to say, unrepentant, or as Larkin would say, facing Nothing. Though a believer myself, I can't help admiring Hitchens for being consistent to the end. Given his intellect and his daring, what kept him out of all the folds can't be anything so commonplace as stubbornness or complacency; it must have been genuine courage.

"One thing that grave illness does," wrote Hitchens, "is to make you examine familiar principles and seemingly reliable sayings." The saying Hitchens discarded quickest was one he might have used to comfort or flatter himself, namely, "Whatever does not kill me, makes me stronger." While conceding that emerging intact from a car wreck or an emotional crisis sometimes left him with "a fatuous sense of toughness," Hitchens recognized painful illness as a permanent game-changer:

[If non-lethal pain were a fortifying agent], then each attack, each stroke, each vile hiccup, each slime assault, would collectively build one up and strengthen resistance. And this is plainly absurd. So we are left with something quite unusual in the annals of unsentimental approaches to extinction: not the wish to die with dignity but the desire to have died.

Among the painfully afflicted, this desire to have died must be a universal. Catholics no less faithful than Therese of Lisieux and William F. Buckley copped to it openly. But Hitchens did no more to hasten his own death than either of them. In fact, not altogether unlike the Little Flower of Jesus—or, for that matter, Blessed John Paul the Great—Hitchens transformed his corporeal breakdown into a bully pulpit. Though never without some regard for his looks—he once wrote of reaching the age when "only women want to go to bed with me"—he appeared in public hairless, pain distorting his features. He shared the fright he felt when his voice "suddenly rose to a childish (or perhaps piglet-like) piping squeak."

Any man who compares near-muteness to "an attack of impotence" is above anything like childish, stiff-necked pride. He's likewise above mere exhibitionistic displays of self-pity. In meditating on the degradation of his voice, Hitchens displays a scientist's concern for accuracy and a poet's sense of wonder. "I 'was' my voice," he writes, and admits living for the pleasures that come from human speech, among them the refinement of the written word. But though Hitchens wishes for "most beautiful apposition of two of the simplest words in our language: the freedom of speech," he recognizes that in its absence he can "do the listening for free" when visited by friends whose speeches normally sell out houses.

In the 15th-century Ars Moriendi, the devil fishes for the dying with five temptations, among them impatience. Hitchens faced the paradox I was my voice; my voice is gone, and yet I am, along with the possibility of worse, without bitterness or bravado. This is the work of a man who has grappled with impatience and finally tamed it. Even if the taming brought Hitchens no closer to communion with the faithful in formal terms, it's an act the faithful might do well to emulate.