Heaven and Hell: About the Book and Author 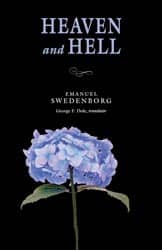 Heaven and Hell is Emanuel Swedenborg's most popular book and his most full report of his experiences in the other world. In it he describes heaven, hell, and the world of spirits that lies between them, and he recounts in detail the process of passing from life to afterlife, as well as the subsequent experiences of the soul. He counters certain traditional views by maintaining that angels (and devils) are not a separately created genderless race but people (both male and female) who once lived in the physical world. These spirits end up either in heaven or in hell depending upon the lives they have led and the choices they have made on earth. Infants and children of any and all religious backgrounds—atheistic, agnostic, non-Christian, or Christian—enter heaven and grow up to young adult age after death, while adults maintain or regain a state of healthful youth. Swedenborg colors his account with abundant details concerning the nature of the spiritual world—not only angels and their powers, their language, their homes and clothing, but also the circumstances of devils and evil spirits.

In many respects, Heaven and Hell is "the place to start" for those who wish to become acquainted with Swedenborg's rich account of the afterlife. Over the years this volume has been much sought also by readers who have an interest in near-death experiences or who seek consolation for the loss of a loved one.

This new, highly readable translation of Emanuel Swedenborg's most popular work restores the original power, dignity, and imagery of one of history's most comprehensive guides to the afterlife. Both seekers and scholars can now access Swedenborg's observations in the spiritual realm.

This new translation is part of the New Century Edition of the Works of Emanuel Swedenborg, an ongoing project to render Swedenborg's theological works in clear, contemporary language that reflects the simple and engaging style of the original Latin. The portable edition contains the text of the New Century Edition translation, but not the annotations or other supplementary materials found in the deluxe edition.

Emanuel Swedenborg (1688-1772) was a Swedish scientist, nobleman, and theologian who spent his life investigating the mysteries of the soul. After graduating from the University of Uppsala, he traveled to England, Holland, France and Germany to study the leading scientists of the time. A member of the Swedish Royal Academy of Sciences, he devoted himself to scientific studies and philosophical reflections that culminated in a number of publications, most notably a comprehensive three-volume work on mineralogy (1734) that brought him recognition across Europe as a scientist and philosopher. After 1734 he redirected his research and publishing to a study of anatomy in search of the interface between the soul and body, making several significant discoveries in physiology. Between 1743 and 1745 he began to have visions of heaven, hell, and Jesus Christ which resulted in a stream of books about the nature of God, the afterlife, and the inner meaning of the Bible. He devoted the last decades of his life to studying Scripture and publishing eighteen theological titles that draw on the Bible, reasoning, and his own spiritual experiences. These works present a Christian theology with unique perspectives on the nature of God, the spiritual world, the Bible, the human mind, and the path to salvation.

Rev. Dr. George F. Dole holds a Ph.D. from Harvard University, an M.A. from Oxford University, and a B.A. from Yale University. Now professor emeritus, Dr. Dole taught ancient languages, the Bible, and theology at the Swedenborg School of Religion in Newton, Massachusetts; he continues teaching using Internet videoconferencing. In addition to his translations of Heaven and Hell, Divine Love and Wisdom, and Divine Providence for the New Century Edition of the Works of Emanuel Swedenborg, his publications include A Book About Us: The Bible and Stages of Our Lives; Freedom and Evil: A Pilgrim's Guide to Hell; Introduction to Swedenborg's Theological Latin; A Thoughtful Soul: Reflections from Swedenborg; A Scientist Explores Spirit: A Compact Biography of Emanuel Swedenborg (with Robert Kirven), and With Absolute Respect: The Swedenborgian Theology of Charles Carroll Bonney.