Hillel vs. History at Chanukah

On the eve of Chanukah, I remember the Maccabees who waged a war against Hellenized Jews, only to then violate both the letter and spirit of Jewish law by seizing control of both the priesthood and the monarchy, and colluding with Rome. Chanukah is often understood as the celebration of the military triumphs of Maccabee guerilla fighters who recaptured the temple and restored its operation, allowing the Menorah to be lit once again. However, the laws of lighting the Menorah echo a different cause for celebration.

There is debate between the House of Hillel and the House of Shammaion the specifics of lighting the Menorah. Both Hillel and Shammai were great Tannaim, or Rabbinic leaders from the Mishnaic Era, famous for their consistently opposing views. Hillel taught that, on the first day of Chanukah, one candle ought to be lit and then one additional candle should be lit per day, until eight candles are lit on the final day. Shammai taught the opposite view. He said that on the first day, eight candles ought to be lit, decreasing by a candle a day, until the last day, when only a single candle is lit.

Shammai's opinion is grounded in the historic Chanukah. The first Chanukah, was in fact celebrated as Sukkot, to make up for the Sukkot missed during the fighting, and thus the Chanukah ritual had to reflect Sukkot observance. On Sukkot, the number of sacrifices brought at the Temple decreased each day, and so we decreased the amount of candles we light.

Hillel argued that decreasing the candles is simply too depressing—instead, we should strive to increase the light and the observance of this sacred ritual: "In sacred matters we elevate, and do not lower." One must strive to be always lighting one more candle. The law was settled according to Hillel's opinion (as is generally the case), even though his argument is based on the spiritual needs of the people and not on commemoration of that first Chanukah.

In siding with Hillel and by choosing to commemorate by not commemorating the war, the Talmudic tradition distances itself from that first holiday and the Maccabees. Rather, through teaching the Hillel and Shammai Chanukah debate, we remember that battles over ideas are best waged in the halls of study. Hillel and Shammai are the anti-Maccabees/Hellenists. Their intellectual disagreements remained intellectual. Their authority rested on the quality of their arguments, not the strength of their swords. When they were not debating, Hillel and Shammai were friends.

The real miracle and triumph of the Chanukah story is the willful forgetting of the historic Maccabees and their holy war. The primary religious observance of Chanukah focuses on peaceful holiness—lighting the Menorah, we remember the miracle of a single bottle of oil that lasted for eight days. Judaism, since the end of the Maccabees, has become a religion where disagreement is woven in the fabric of tradition, perhaps in the self-conscious effort to never again be the Maccabees. 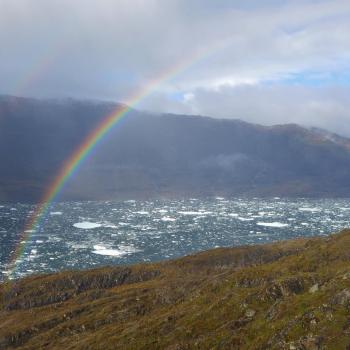 Many, Many, Many Gods
James Haught
4

The Pope, the Emperor, and the Venice Myth
Philip Jenkins
Get Patheos Newsletters
Get the latest from Patheos by signing up for our newsletters. Try our 3 most popular, or select from our huge collection of unique and thought-provoking newsletters.
From time to time you will also receive Special Offers from our partners that help us make this content free for you. You can opt out of these offers at any time.
see our full list of newsletters
Editor's picks See all columnists