The Lower Lights: Music and the Common Ground of Faith

December 06, 2011 by Tony Rossi
"Like" the Patheos Catholic Page on Facebook to receive today's best commentary on Catholic issues. 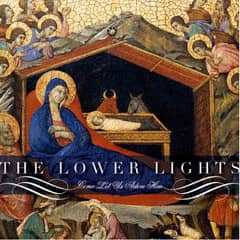 Christmas is the time of year we celebrate the harmony between God and man that Jesus' birth restored. It's the kind of harmony that's reflected in the choir-sung Christmas music that fills our churches, radio stations, and iPods. It's also present in the beautifully blended voices of The Lower Lights whose new Christmas album, Come Let Us Adore Him, is a work of spiritually transcendent beauty.

With a folk and bluegrass-flavored sound reminiscent of "Down from the Mountain," the "O Brother, Where Art Thou" concert, The Lower Lights hooked this country-music-loving city boy from the second I heard the festive banjo arrangement at the beginning of "Oh Come, All Ye Faithful." With a guest vocal from Brooke White (American Idol, Jack and White), that song sets the tone for the sacred and joyful music that follows. Though the album consists of traditional carols we've all heard before, like "Away in a Manger" and "Angels We Have Heard on High," The Lower Lights make them sound fresh in no small part due to the sublime harmonies this collaboration produced.

This group of more than forty singers and musicians originally came together in 2009 to record an album of hymns -- some of which they'd grown up with, others that they'd discovered more recently. The Lower Lights' name originates from a sermon by 19th-century Protestant preacher, Dwight L. Moody, who told the story of a ship that crashed into the shore of a Cleveland harbor during a violent storm one night, killing many onboard. Though the lighthouse shone brightly, its lower lights, which help guide ships safely to shore, were not working. Moody concluded his sermon by explaining, "Brethren, the Master will take care of the great lighthouse; let us keep the lower lights burning." That imagery so impressed Moody's friend, lyricist and composer Philip Paul Bliss, that he turned it into a hymn called "Brightly Beams Our Father's Mercy:"

Brightly beams our Father's mercy from His lighthouse evermore,
But to us He gives the keeping of the lights along the shore.
Let the lower lights be burning! Send a gleam across the wave!
Some poor fainting, struggling sea-man you may rescue, you may save.

Those lyrics resonated with the musicians who hoped that their music would serve as a little piece of God's light in a world that can sometimes seem very dark; hence, they called themselves The Lower Lights and included the aforementioned song on their debut album, A Hymn Revival.

What sets A Hymn Revival a little bit apart from your standard gospel album is that -- since many of The Lower Lights' members come from a Latter-day Saints background -- some Mormon hymns are included. Paul Jacobsen, a founding member of The Lower Lights, explained to me that hymns were "part soundtrack, part wallpaper, part sermon" to him while he was growing up. His musical tastes eventually led him to the Johnny Cash album My Mother's Hymnbook, which introduced him to God-centered music on an even wider scale.

Other members of The Lower Lights also brought their own musical interests into play when the group got together. For instance, Debra Fotheringham introduced the group to the old Catholic Celtic hymn, "Be Thou My Vision." Jacobsen recalled the first time he heard it: "It was instant [connection]. The message is as beautiful as the melody. The only question anybody asked was ‘Why have I never heard this incredible song before?' And we get the same response at our shows."

The Lower Lights have performed at Mormon venues, Protestant churches, and non-denominational functions, always getting a positive response. It was one of the group's goals from the outset to transcend denominational differences. Jacobsen says, "I always hoped we wouldn't be pigeonholed as a Mormon group . . . any more than the Blind Boys of Alabama or The Staples Singers . . . would be called a ‘specific denomination' group. That's heady company to put ourselves in and I don't intend to say they're our peers, as they are just incredible . . . I just talk about them as a reference point of gospel music good enough to not worry about . . . labels or borders . . . If it's Protestant, Catholic, Mormon, Hank Williams, Gillian Welch, Louvin Brothers . . . we love a good melody with a good lyric that resonates. And I think we have tried our best to see these songs as borderless and inclusive and [part of] the common ground of faith."