"A Man for All Seasons" and the Call to Fanaticism

December 02, 2011 by Joseph Susanka
"Like" the Patheos Catholic Page on Facebook to receive today's best commentary on Catholic issues.

"What does it profit a man to gain the whole world and forfeit his soul?
For what can a man give in return for his soul?"—Mark 8:36-38 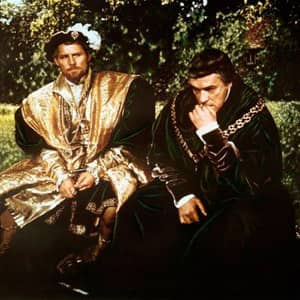 One can scarcely flip on a TV, crack open a paper, or bring up a browser window nowadays without coming face to face with Fanaticism. Whether political, religious, moral, or even cosmetic, extreme views and their destructive consequences are an ever-present force in our lives. And the cost of such extremism—the calcification of our abilities to compromise, to negotiation, and to build consensus that are so essential to human interaction—is felt more keenly with each passing day.

Yet for a "dyed-in-the-wool fence sitter" like me, balanced precariously on the shifting shoals of the Middle Ground, this era's most disconcerting threat is not the "real world" danger that follows so closely upon the heels of extremism. Instead, it is the growing fear that outsiders will lump middlers such as myself in with the radical fringes around us, unwittingly tarring us with the same brush used on those far to our right or left. Few things are as important to me as distancing myself from the fanatics.

Still, I sometimes wonder if abandoning radicals altogether carries with it nearly as much risk as embracing them. In my obsessive efforts to distancing myself from the bathwater of their oft-criticized methods, am I engaging in a bit of baby-throwing? Is fanaticism in its truest sense intrinsically evil? Or is it the way we act upon its prodding that determines its true worth?

A particularly striking example of this question is Fred Zinneman's "A Man for All Seasons"—a film whose portrayal of its hero, St. Thomas More, seems poorly suited to the term "fanatic." As a prominent Catholic in the court of Henry VIII, More struggles to balance the demands of his hedonistic sovereign with those of his own deep-seated Faith. Aided by his acerbic sense of humor, vast legal knowledge, and cunningly careful use of the English language, he steers a perilous course between the Scylla of Apostasy and the Charybdis of Regal Dissatisfaction. But when Henry's belligerent insistence on absolute obedience forces Thomas to choose between God and king, More's true nature is revealed. This man, known throughout England for his charm and grace, his droll, piercing intellect, and his firm yet gentle kindness, is as fanatical as they come—an extremist of the highest order.

Nowhere is this fanaticism more evident than in the film's emotional climax: the final courtroom scene. Here, St. Thomas' efforts to remain faithful to both his king and his church have ended in inevitable failure, and the embattled saint finally accepts that his case is lost. Undone by the testimony of his friend and protégé, Richard Rich, More wryly remarks on the fool's bargain his friend has made. "Why Richard, it profits a man nothing to give his soul for the whole world . . . but for Wales?"

For More, sharp of tongue and even sharper of intellect, this moment is an opportunity to reach out one last time in an attempt to show his weak young friend the truly damnable blunder he has made. But for the audience, it is that most cathartic of moments when Rich's betrayal is shown in its true light, the absurdity of fatally compromising one's soul for something as transient and fleeting as worldly fame and fortune, cast into sharp contrast with More's impending martyrdom.

Yet even as I rejoice at More's withering rebuke, I realize that it is just as truly directed at me as at the unfortunate Rich. Can I honestly say that I would embrace St. Thomas' uncompromising stubbornness rather than his betrayer's earthly reward? Am I not constantly giving away little pieces of my soul, and for far, far less than Wales?