The Real Way to Decorate a Christmas Tree

Every December, I put up a Christmas tree, and don't think much of it; after all, what is so unique about an American Hindu putting up a Christmas tree? A tree is a symbol of life, the lights are a symbol of knowledge, and the nativity scene with the baby Jesus underneath is akin to the avatar concept that many Hindus ascribe to—that God can take a human form, to protect and save us. A Christmas tree is symbolic of joy and fun, the presents underneath symbolic of giving and sharing. Hindus love that which is colorful and festive—look at our deities, our altars, our sacred art—and giving (dana) is a highly valued practice. But this year, the boxes of ornaments lay around our half decorated tree as I discovered that I am in the middle of my own December Dilemma: I don't want to celebrate, decorate, or put presents under the tree.

My December Dilemma is not the one that the Anti-Defamation League or my Jewish friends speak about. The ADL actually describes it as a "difficult task of acknowledging the various religious and secular holiday traditions . . . Teachers, administrators and parents should try to promote greater understanding and tolerance among students of different traditions by taking care to adhere to the requirements of the First Amendment." The Jewish community's issue with this month has led to a movie (December Dilemma), books (such as Sam I Am, about a boy raised by a Jewish father and a Christian mother), and countless other resources such as parenting seminars at synagogues. These are done to help children and parents—especially interfaith couples—contend with how to respond to the lavish festivities and the consumerism that often goes with Christmas. But my dilemma is more a dharmic one, especially since I head to New York, where the source of my December discontent originates: Wall Street. Specifically, Occupy Wall Street and the depressing news about economic inequities, about those who have and those who don't.

I had hoped to go to the Zucotti Park encampment, not as a voyeur, but as a sympathizer. The non-violent movement that began as a protest about the corruption and greed on Wall Street was something I wished to witness and support: it was a throwback not simply to the Arab Spring, but to the Gandhian resistance movement, a way to change the world and the economic inequalities that exist today. However, the Occupiers were removed and I had no one to sympathize with, no Liberty Plaza to visit, and my disappointment became my dilemma, my discontent.

But Gandhi said we must be the change we want to see, and as Ian Desai pointed out in the New York Times recently, he would have rejected the division between the 99 percent and the 1 percent. Desai also pointed out that Gandhi supported and prescribed constructive social action, "through which we might begin to mend the world." This brought me back to my Jewish friends, who want to repair the world—through the concept of Tikkun Olam—particularly one friend, Gail Katz, co-founder of WISDOM, a non-profit interfaith women's organization of which I am a Board member. Gail's interfaith journey explains how she became sensitive to the plight of "the other" through various childhood experiences, and how her adult life is centered on social action, and bringing diverse people together to do good things.

I agree with Gail: my dharma is to focus on social justice and to do something—not visit someone. So I participated in WISDOM's second Kids Against Hunger community service project. According to the Kids Against Hunger Coalition website, ten children per minute die of starvation or malnutrition related diseases, and WISDOM decided we wanted to do something to help. Co-sponsored by the National Council of Jewish Women and WISDOM, with much of the financial support coming from St. Hugo of the Hills Catholic Church, the Muslim Unity Center in Bloomfield Hills, and the Bharatiya Temple of Metropolitan Detroit, WISDOM raised funds and gathered people of diverse religious and cultural backgrounds on a Sunday afternoon in December. Nearly 250 of us came together at Rush Trucking Warehouse in Wayne, to package twenty thousand meals in just a few hours. A third of these go to feed local children in need, a third go to twenty other countries, and the remaining third go to help in areas where disaster relief is needed. We are the 100 percent, we gave a 100 percent, and my Christmas tree is now decorated - 100 percent! 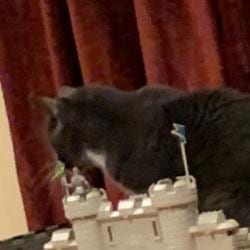 Car Caravan Blocks Christian Preacher Sean Feucht's NYE COVID-Spreading...
Hemant Mehta
Get Patheos Newsletters
Get the latest from Patheos by signing up for our newsletters. Try our 3 most popular, or select from our huge collection of unique and thought-provoking newsletters.
From time to time you will also receive Special Offers from our partners that help us make this content free for you. You can opt out of these offers at any time.
see our full list of newsletters
Editor's picks See all columnists