Is the Arab Spring Good News for Christians?

January 09, 2012 by Kurt J. Werthmuller
"Like" the Patheos Evangelical Page on Facebook to receive today's best commentary on Evangelical issues. 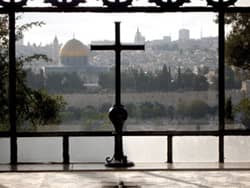 Until relatively recently, few American evangelicals knew that there is an indigenous Christian community anywhere to be found in the Middle East. Most had a dichotomous view of the region: there was the Arab world, which many presumed to represent a homogeneous and antagonistic Muslim region, and the "Holy Land"—which is evangelical-speak for a homogeneous, Jewish Israel.

Neither image reflects reality, of course. The "Holy Land" includes Israeli Jews (along a spectrum of secular and religious persuasions), a significant minority of Israeli Arabs, and the Palestinian territories. And while Sunni Muslims do comprise an overwhelming majority of the populations in the Arab world, a number of Arab states also include sizeable communities of religious minorities, including small heterodox sects (Alawi, Druze, Yazidi, etc.) and a surprising number of Christians.

In fact, the broad experience and status of Middle Eastern Christianity is diverse, and it is ancient. There has been an unbroken Christian presence in Egypt—that is, the Copts—since the first century, when the apostle Mark preached the Gospel in Alexandria. Christians probably became a demographic majority of the country by the 4th century, and likely remained so until the 10th (centuries after the Islamic Conquests); even today, there are likely seven million or more Christians in the country: Orthodox, Catholic, and Protestant. In Syria, where a variety of Christian denominations comprise around 10 percent of the population, one can still hop on a bus from Damascus to the village of Maaloula, where several thousand Christian residents of the town, and dozens of monks in the abbeys above it, still speak Aramaic among their families. Most of that nations' Christians are Greek Catholic, or Melkite, a sect that combines Eastern Orthodox liturgy with Catholic loyalties, and can be found connected across Lebanon, Jordan, and Palestine as well. In Iraq, the nation's once-massive community of over 1.5 million Christians (including Assyrian, Chaldean, Jacobite, and other sects) has been devastated by the war, as Islamic extremist groups have used the chaos of war to attack Christian churches and businesses. Today there are less than half a million left in the country; hundreds of thousands fled to Syria as refugees over the last several years, where they now face another civil war in their host country.

Over the coming weeks, this series of articles will focus on the background, present status, and possible future of the Christian communities of several of these key countries in the Arab world. Three central areas of concern will be readily apparent to readers as key themes throughout this series, in stark contrast to the wave of optimism that has until recently dominated the narrative of the "Arab Spring."

Middle Eastern Christianity is, like the Middle East itself, bewilderingly diverse. Until today, it is a much larger community than most Western evangelicals realize. It is also deeply ingrained in the various social contexts of the region. In other words, Christianity has always been part of the Arab world, and its diminishing status will threaten not just the presence of Christianity in the land of its birth, but the very fabric of the region as a whole.

As I have written elsewhere, the "democratic experiment" of the Arab Spring will be an absolute and abject failure if it excludes the region's religious minorities or even merely fails to protect them: Middle Eastern Christians need their home in the Middle East, and the Middle East needs Middle Eastern Christians. In light of this uncertain time, it is this author's hope that his readers, evangelical and otherwise, will be moved to prayer, to outreach, and to action.

Knowledge is only the first step.