"An Awakening of Conservative Christians": Rick Santorum on Faith and Politics

January 10, 2012 by Timothy Dalrymple
"Like" the Patheos Evangelical Page on Facebook to receive today's best commentary on Evangelical issues. 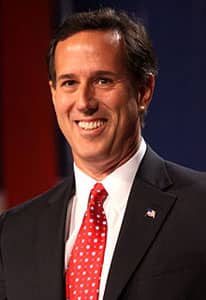 In October 2010, I interviewed former Senator Rick Santorum, who at the time was working at the Ethics and Public Policy Center and, as he said, "kicking the tires and having my tires kicked" about a potential run for president. The conversation was centered especially on the roles of faith in politics and how Senator Santorum lived out his convictions in office.

As it happened, my hard drive was damaged and the interview was inaccessible until recently. Given Santorum's rise in the Republican primary contest, and the enduring nature of the issues we discussed, I thought it would be interesting to transcribe and publish the interview.

I want to begin with questions regarding your own political career to date, and what you've learned along the way. You were elected to the House of Representatives at the age of 32, and then to the Senate at 36. You are well known as a Catholic, but that much success at a young age might well tempt a person to pride, and access to such power might well tempt one to seek power for its own sake. How did you maintain—or perhaps sometimes even fail to maintain—the proper perspective on yourself and your political career?

I can say in all honesty that I didn't always maintain the right perspective. Pride comes with the territory when you're successful—and particularly when you're successful in such a public manner—and surrounded by large groups of people who work for you. There are a lot of trappings to political success. It's very easy—even if you are not caught up in the adulation, which was not a common issue for me—to struggle with pride.

My particular struggle with pride centered on the importance of the things I was doing. I came to believe (and there is some legitimacy in believing it) that when you're working on very important things, that makes other things less important. So you tend to forget some of the basic necessities of life, to be so driven that you do not treat your fellow man in the way you probably should treat them, and to pay too little attention to the other important things in life. This was the great trap of pride for me. I could always legitimize it by saying that I was called to do these important things. In retrospect, now that I can look back and see my colleagues from the outside and not just the inside, I understand and sympathize with that struggle—but that doesn't mean it was right.

How, then, do you escape the temptations of pride in such lofty circumstances?

For me, it was a matter of having an accountability circle. Accountability is extremely important. In light of the public respect that comes from being a United States Senator, I was always deeply blessed to have a wife who kept me grounded. My staff was the same way.

We also had a prayer group of peers who watched out for each other. They see things others don't, because they work beside you and many of them have the same issues. Sometimes you can see them in others more easily than you can see them in yourself.

And finally, from the faith point of view, it was key for me to keep my mission in focus. You have to remember that you're in that position in order to serve others. It's about serving God, serving your country, and serving the people you were elected to represent.

Some have characterized your political style as confrontational. What is the right way for Christian politicians to engage in disagreement?

I was confrontational when I felt it was important to be confrontational. My record, also, though it's not necessarily accentuated, was also rather cordial and effective at getting things done in a cooperative way. My legislative accomplishments are fairly long and exclusively bipartisan, and I often worked together with people with whom I had many disagreements and very contentious relationships.

For instance, if you look at the fact that I went toe-to-toe and had some rather harsh debates with Barbara Boxer, and yet we worked together to sponsor three different pieces of legislation—two of them fairly significant pieces on foreign policy that we agreed on—that will tell you that you can be confrontational and also work together when that's necessary in order to get things done.

She didn't necessarily take the lead on those pieces of legislation. I did, but she did support them.

Or for another example: Dick Durbin and I don't get along at all, but we worked together on AIDS and animal welfare bills. It wasn't always comfortable. We had some very tough differences. But we wanted to get these things done, so we put our other differences aside. It's important to argue passionately for the things you care about, but you have to keep the issues from being personal.