The Church Is Flat: An Excerpt 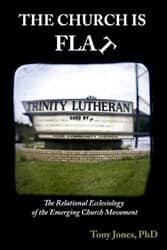 Now Featured in the Patheos Book Club:
The Church Is Flat: The Relational Ecclesiology of the Emerging Church Movement
By Tony Jones

Chapter 5: The Christological Office of "Friend" and Practices of Public Friendship

In adding the relational title, "friend," to the honorific titles, "prophet, priest, and king," Moltmann proposes that "there is no human hope" for a world free of class struggles and domination without "a classless society free of domination, without repression and without privileges."[i] And that comes only by friendship, characterized by "affection, loyalty, reliability, constancy in disaster, openness, freedom, sympathy, and noncompetitiveness."[ii] Moltmann also issues a corrective to the modern conception of friendship by insisting that the friendship for which he is calling not be private but public: "The friendship of Jesus cannot be lived and its friendliness cannot be disseminated when friendship is limited to people who are like ourselves and when it is narrowed down to private life."[iii]

"Friend" has been a core theological rubric in the emerging church movement since its inception. The leaders of Emergent Village, arguably the most significant organization in the ECM between 2001 and 2008, identify the organization as a "growing, generative friendship among missional Christian leaders."[iv] Supporters and funders of the organization go by the appellation, "Friend of Emergent Village," and the organization distributes iconographic web badges with that phrase that are common in the Christian blogosphere. In my book The New Christians: Dispatches from the Emergent Frontier, I proposed that, "Emergents believe that an envelope of friendship and reconciliation must surround all debates about doctrine and dogma."[v] Moltmann proposed "Friend" as a fifth christological office in 1975; Emergent Village's introduction of that term as the hallmark of their network in 2001 did not rely on Moltmann, but the connection is more than coincidental.

The adoption and use of the language of friendship will aid emerging church congregations in becoming the egalitarian fellowships that they long to be. These congregations have largely abdicated the traditional titles taken by clergy (Reverend, Pastor, Father), titles which sometimes serve to prop up traditional hierarchical structures and the attitudes of domination and submission that so often accompany them. Now, at a time when public distrust of clergy is on the rise due to the many public scandals of the past several decades, clergypersons may do well to relinquish antiquated and honorific titles in favor of a single designator, like "friend," that clearly communicates an equivalency between all members of a faith community. Practices that relocate ecclesial authority in language of trust-like the office of friend-communicate the equivalency of all members of the faith community before God and downplay the traditional power differential between clergy and laypeople.

[i] Moltmann, The Church in the Power of the Spirit: A Contribution to Messianic Ecclesiology, 116.

[ii] Scott and Cavanaugh, The Blackwell Companion to Political Theology, 237.

[iii] Moltmann, The Church in the Power of the Spirit: A Contribution to Messianic Ecclesiology.

[v] Jones, The New Christians: Dispatches from the Emergent Frontier, 77.

[vi] This is not unique to the emerging church movement. It is the very model being used by Interfaith Youth Core. But the ECM is uniquely poised within American Protestantism to catalyze a similar dialogue.

[vii] Austin, How to Do Things with Word