"When a population becomes distracted by trivia, when cultural life is redefined as a perpetual round of entertainments, when serious public conversation becomes a form of baby-talk, when, in short, a people become an audience, and their public business a vaudeville act, then a nation finds itself at risk; culture-death is a clear possibility."—Neil Postman, Amusing Ourselves to Death 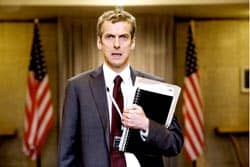 One of the greatest challenges I have faced while writing this column has been the search for a "personal cinematic philosophy:" a series of principles by which to evaluate and critique the films I watch. In recent days, one principle has risen to the top: as a work of art, a film should stand on its own two feet. Audiences should not be compelled to look to a filmmaker for explanation, and a cinematic work should not require a broader contextual understanding to be interpreted. It should be self-sufficient.

The 2009 British film In the Loopis a perfect example of this sort of referential dilemma. A relentless lampooning of the political process leading up to the Iraq War, it follows a small-time British politician—Minister for International Development Simon Noster—as he struggles to escape his televised comment that "war in the Middle East is unforeseeable." American and British politicians alike take notice of his statement, and he becomes a figurehead in the raging political battle over impending military action. Despite ample evidence that he is profoundly and inalterably "in over his head," he is hauled before the Future Planning Committee by America's most earnest Doves in a last-ditch effort to forestall the declaration of war, but Hawks from both sides of the Atlantic will let nothing stand in their way.

Simon is targeted by Malcolm Tucker, the Prime Minister's Director of Communications, and the man responsible for drumming up support for a pro-war vote at the United Nations. Soon, Simon and his staff are shuttling back and forth across the Atlantic as Malcolm works feverishly to turn the situation to his advantage. Further complicating matters, Simon has a number of quaint, old-fashioned "principles," and his resistance to Malcolm's efforts at "creative intelligence gathering" threatens to undermine the whole operation. Will Simon's bumbling but earnest efforts torpedo the looming conflict? Or will the pragmatic Malcolm prove the ultimate puppet master?

In the Loop and Dr. Strangelove would make a fantastic double feature. Both are simultaneously vicious, hilarious, and disconcerting; both are almost impossibly cynical in their views of the political process; and both do a wonderful job of capturing the hopes, fears, and idiosyncrasies of an entire generation: the Cold War Era of Strangelove and the post-Cold War crowd of In the Loop.

But, In the Loop isn't "Strangelove for the post-Cold War Generation"; it is a British Wag the Dog. Both films feature bitingly observant scripts, cartoonish levels of profanity, "lifetime diplomats" whose often-petty actions lie at the root of many modern-day political decisions, and the poisonous pragmatism of politicians who are willing to alter and even fabricate information for the sake of their political agendas. But perhaps the most intriguing similarity of all is the way in which the "managing" of information has become of paramount importance.

Rather than bringing an excess of clarity, the technology and information explosion of our time has only made it easier for people like Malcolm Tucker to distort the truth. Responding to Foster's confused protestation that the intelligence he's peddling is demonstrably false, Tucker says: "Whether it has happened or not, it is true." He will make it so. And it is the advent of the "Political Baby Talk" Neil Postman warns against that has made such blatant insincerity possible.

As the current presidential primary makes abundantly clear, having a handful of funny, simple, and (above all) short answers is far more important than having a nuanced, thoughtful grasp on complex issues. Our generation unconsciously bestows the veneer of entertainment upon anything it sees on TV, transforming themselves from constituents looking to be won over, into nothing more than "audience members."