Secular Theocracy: The Foundations and Folly of Modern Tyranny, Part 2 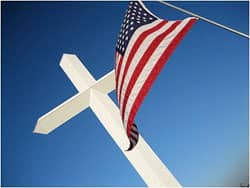 To review from the First Part of this essay: We live in a secularized world of nation states in which traditional religion, especially Christianity, is unwelcome. Rooted in the "Enlightenment," this view supports a secularized public square enforced by government and that progress requires forcing religion ever backward into remote corners of society. In short, America has become a secular theocracy with a civic religion of national politics (nationalism) occupying the public realm in which government has replaced God.

During the Enlightenment, nationalism became the new civic religion, in which the nation state was not merely a substitute for the church, but a substitute for God, and political religion benefited from being more tangible than supernatural religion in having the physical means of violence necessary to enforce mandatory worship and funding. Nation states provided a new kind of salvation and immortality; one's death is not in vain if it is "for the nation," which will live on.

This "myth of religious violence" lived on with legal theorist John Rawls, who claimed that the modern problem is a theological one and the solution is political. For Rawls (see his Political Liberalism), since people believe in unresolvable theological doctrines over which they will kill each other, a secular state must rule. Similarly, Stanford law professor Kathleen Sullivan, a secularist, has claimed that as a necessary condition for peace, religion must be banished from the public square in order to avoid a "war of all sects against all" (University of Chicago Law Review 59, 1992, pp. 115-194).

the training of American citizens in an atmosphere in which children may assimilate a heritage common to all American groups and religions . . . .This is a heritage neither theistic nor atheistic, but simply civic and patriotic. A patriotic and united allegiance to the United States is the cure for the divisiveness of religion in public.

In his dissent, Justice Potter Stewart correctly warned that the Abington ruling would be seen "not as the realization of state neutrality, but rather as the establishment of a religion of secularism."

The reality of today's secular theocracy is that its hypocritical authoritarianism circumvents the natural-law tradition of Christian teachings. Cavanaugh well sums up the incoherence of the secular theocrat who claims that, "Their violence—being tainted by religion—is uncontrolled, absolutist, fanatical, irrational, and divisive. Our violence—being secular—is controlled, modest, rational, beneficial, peace making, and sometimes regrettably necessary to contain their violence." The appalling problem with the "myth of religious violence" is not that it opposes certain forms of violence, but that it not only denies moral condemnation of secular violence, it considers it highly praiseworthy.

In Politics as Religion, Emilio Gentile notes that the "religion of politics" is "a system of beliefs, myths, rituals, and symbols that interpret and define the meaning and end of human existence by subordinating the destiny of individuals and the collectivity to a supreme entity." A religion of politics is a secular religion because it creates "an aura of sacredness around an entity belonging to this world." And according to Cavanaugh, "People are not allowed to kill for 'sectarian religion'. . . . Only the nation-state may kill. . . . it is this power to organize killing that makes American civil religion the true religion of the U.S. social order."

Among most Christians in the United States, for example, while few would kill in Christ's name, killing and dying for the nation state in war—and supporting "our troops" who do so—is taken for granted. The religious-secular split enables public loyalty by Christians to the nation state's secular violence, including invasive wars, torture, and "collateral damage," while avoiding direct confrontation with Christian beliefs about the supremacy of God and natural law teachings.