January 18, 2012 by Lisa Mladinich
"Like" the Patheos Catholic Page on Facebook to receive today's best commentary on Catholic issues.

"I'm not fearing any man. Mine eyes have seen the glory of the coming of the Lord!"
-Martin Luther King, Jr. 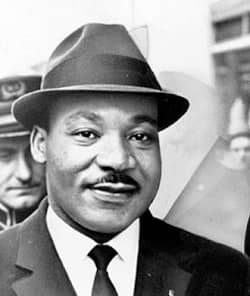 It made me cry to watch the grainy, 17-minute film of Martin Luther King, Jr., in August, 1963, delivering his "I Have a Dream" speech on the steps of the Lincoln Memorial.

He was radical in the best sense. He didn't just want to elbow the unworthy racist aside to take what was rightfully owed him or to declaim, deplore, and destroy.

He didn't seek revenge. He sought something far more dangerous, and he knew it. He wanted to live with his "white brother," now enlightened and redeemed; to know him, help him, and love him. In spite of his human foibles, the young minister's heart bore the greatness of a truly Christian spirit. So it's no surprise that the serpents' nest his movement stirred attacked him without mercy.

Yet, in the best sense, even death did not stop him.

I say this all the time: everybody suffers. But if we try to do something holy, we will at least suffer meaningfully. Unfairness, rejections, and disappointments of life can build us up if we only cling to Jesus Christ, who accepted suffering with great humility. Rather than leading us to exhaustion and despair, our crosses will then be among our greatest blessings.

In this radical trust, we open to a flood of graces that bind our spiritual wounds, reconcile us to each other, and give us a precious glimpse of heaven's light, right here in the darkness of our earthly lives.

I subscribe to a yahoo group called "Mary Vitamins," which puts out a Marian newsletter a couple of times a month. The latest issue shares this from St. Louis de Montfort:

"I reply that it is quite true that the most faithful servants of the Blessed Virgin, being her greatest favorites, receive from her the greatest graces and favors from heaven, which are crosses. But I maintain that it is also the servants of Mary who carry these crosses with more ease, more merit and more glory. That which would stay the progress of another a thousand times over, or perhaps would make him fall, does not once stop their steps, but rather enables them to advance..." (True Devotion to Mary, Tan Books)

Yes, folks, suffering is a sign of great favor!

It is true that during the worst times of persecution against the Church, many great saints appeared, as if the earth had been made spiritually fertile by the blood of martyrs. They were ordinary people like us, but their faith gave them the grace to trust at the worst possible moments. And that trust was rewarded in their holy deaths and the glory of everlasting life. Because they trusted in God's greatness and power, their lives were not wasted, but continued to bear fruit for generations to come.

I hope you know I'm not trying to sell you on martyrdom. Nobody wants to be killed, even for what is unequivocally true and good. But if we ask for the graces needed, we won't live in fear of the small, mundane deaths of our ordinary existence. Being rejected socially, or mocked in the media simply won't deter us anymore, because we'll have our eyes on heaven, not earth.

With an appreciation for the redemptive power of suffering in union with the Cross of Christ, we'll find the heroic in ourselves. We'll be able to discern more clearly what God is calling us to each day, in each moment. We'll experience the intense and lasting joy of loving fully without worrying what others think of us and our message.

And thank God Almighty, we'll be free at last.

I'll close with an excerpt from Reverend King's final public address, in Memphis, just before he was assassinated, knowing full well that there had been death threats:

"We've got some difficult days ahead. But it doesn't matter with me now, because I've been to the mountain top. And I don't mind. Like anybody, I would like to live a long life. Longevity has its place. But I'm not concerned about that now. I just want to do God's will. And He's allowed me to go up to the mountain. And I've looked over. And I've seen the promised land. I may not get there with you. But I want you to know tonight, that we, as a people, will get to the promised land! And so I'm happy, tonight. I'm not worried about anything. I'm not fearing any man. Mine eyes have seen the glory of the coming of the Lord!"

Be not afraid. God bless you!