Nakedness Is Next to Godliness

January 24, 2012 by Joseph Susanka
"Like" the Patheos Catholic Page on Facebook to receive today's best commentary on Catholic issues.

"And the eyes of them both were opened, and they knew that they were naked;
and they sewed fig leaves together, and made themselves aprons."
Genesis 3:7 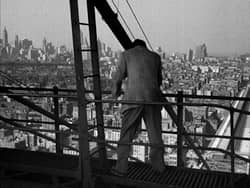 Jules Dassin, one of Hollywood's most influential exiles and the man behind the legendary Rififi—that often-imitated, rarely-matched precursor to the modern "heist" film—shot his police thriller, The Naked City in 1948, entirely "on location" in New York City. The resulting kaleidoscope of crime—in which the city plays as prominent a role as any actor—follows Detective Dan Muldoon (Barry Fitzgerald) as he investigates the murder of young Jean Dexter, a ex-model found dead on "a hot night working its way towards dawn."

What begins as a "simple" homicide investigation for Muldoon and his assistant, Jimmy Halloran, quickly turns complex. Within hours, the pair's legwork produces a number of inconsistencies, revealing a network of criminal activities; Miss Baxter's death, a tragic but seemingly minor incident, leads them on a spiraling descent into the darkness of the New York underworld. There, the detectives are brought face-to-face with the terrifying truth that the cloying, clinging fingers of Death will touch everyone in the great city they call home, no matter how insignificant, and that their task to preserve the peace is a truly Sisyphean one—a sentiment best captured by the narrator's final words: "There are eight million stories in the Naked City," he says. "This has been one of them."

Its impressive technical mastery over many noir components notwithstanding, The Naked City is most interesting for the ways in which it departs from the genre's playbook. The dark settings, stark cinematography and violence are all things we've seen before, but the film's protagonists are not. Typical noir heroes are full of angst and conflicted moralities; Dassin's detectives, however, are obviously and almost disconcertingly happy. They are "accidental" heroes whose presence at the center of the story stems from their seemingly arbitrary assignment to Miss Dexter's case, and the "fly-on-the-wall" documentation of their efforts gives the work an "Everyman" flavor that is conspicuously absent in the vast majority of noir films.

This focus on the "ordinary" men and women of New York is the catalyst for the film's most important insight: despite the suggestions of its title, its subjects are most definitely not "naked." Young Halloran, whose nearly hourly encounters with Evil would crush many a man, is supported in his daunting task by his lovely young wife and son—the presence of his family a crucial barrier between himself and the outside world. Muldoon, the wisecracking Irish Virgil that guides us through the Inferno of the Big Apple, is matter-of-fact, unsentimental, and funny; his reaction to the many vicious details of the Baxter case seems almost cavalier. But he has a job to do, and it's a relentlessly tough one. And so, he creates a mask of flippancy to defend himself from the brutalities of his work. (Those few characters without masks, excruciating in their pain, highlight the importance of Halloran and Muldoon's defenses. Jean's mother, for example, is nakedly obvious in her anger when she learns of her daughter's death, and just as nakedly devastated when asked to identify the body of her beloved child.)

The Naked City reminds us that instinct to hide behind such facades is a powerful one. Faced with the challenges of daily life, many of us create personas to cope with those things we find most challenging—easily defendable fortresses that hold the harsher, more demanding "realities" of our world at bay. Sometimes, these masks are a means of escaping (and hiding) from the truth. But sometimes, they are a sign of progress rather than a sign of escape.

Sometimes, these masks are created to protect those we love rather than to hold them at arm's length.

We all have secrets—deep, dark truths about ourselves that we (rightfully) hide from everyone but God Himself, and that we must struggle daily to overcome. Recognizing these failings, we erect barriers to conceal them from those around us. Yet the facades that arise from this reality should not always be easily dismissed; often, they are a sign of our desire for self-improvement rather than our need for self-deception. Recognizing our nakedness, we are ashamed of what it reveals. Like the Original humans, our efforts at concealment acknowledge that we are sinful, broken creatures. And that shame is the catalyst for our salvation.