Years ago one of my colleagues in the history department got no small measure of satisfaction out of razzing another colleague in the psychology department about her dedication to what he described as "a pseudo-science." I made no effort to adjudicate those debates then and I won't now. I have benefited from talking to psychologists over the years and—granted the fuzzy lines that distinguish the art from the science—I remain convinced that psychology has a great deal to commend it. (Freud, not so much.)

But some of the changes to the Diagnostic and Statistical Manual of Mental Disorders, or D.S.M. that the American Psychiatric Association is now contemplating give me pause. In particular, I have in mind the proposed change to the description of depression that contemplates eliminating the so called "bereavement exclusion." In the past, the D.S.M. declined to characterize the grief that follows on the loss of a loved one as part and parcel of a depressive order, arguing (or assuming) that the depression that follows the loss of a loved one is "normal." But Sidney Zisook, who is a professor of psychiatry at the University of California in San Diego, argues that there is no reason to treat bereavement as a different stressor from the others that lead to depression. Standing with Zisook in the debate, Pittsburgh's David Kupfer (and chair of the APA's editorial committee) argued, "If someone is suffering from severe depression symptoms one or two months after a loss or a death, and I can't make a diagnosis of depression—well, that is not being clinically proactive. That person may then not get the treatment they need."

There are undoubtedly a number of issues at stake, but the debate that has ensued among psychiatrists appears to have coalesced around two conflicting positions. One side argues that the changes will make it possible to be medically proactive in treating depression. The other argues that given the profile of bereavement and its duration, the changes run the risk of medicalizing normal human behavior.

On one level this debate may be about the mix of science and art that is the practice of psychiatry. It is one thing to identify someone's behavior as "depressive." It is another thing to determine whether that experience is debilitating or pathological. One can only hope that none of us will find ourselves being treated by physicians who depend too heavily upon a medical cookbook—regardless of what is in it.

That said, from a spiritual point of view, the debate does underline the inadequacy of an exclusively therapeutic approach to the experience of bereavement and, in particular, the move to drop the bereavement exception:

One, it is not possible or even important for us to be happy all the time - -and we should not medicate ourselves to insure that we are. There is nothing wrong with being happy. It is certainly an approach to life that tracks well with the way that we live.

But, broadly speaking, it could be argued that our cultural default mode is maximize good feelings, minimize bad ones, and seek to move back to good feelings as soon as possible when we are feeling bad. From a spiritual perspective, however, being happy is a secondary consideration. As Ignatius of Loyola noted centuries ago, the measure of our experiences is not our level of happiness. Consoling experiences draw us closer to God and others in love. Desolating experiences drive us further from a love for both. Intimacy with God, not our happiness, is at the heart of the spiritual life.

Two, not all struggles should be medicated. The current debate over the revisions to the D.S.M. revolves around the latitude to diagnose and medicate. Given the nature of the document, that's understandable. There are times when chemistry is the issue—either as a means of addressing a temporary cause of emotional distress or a lifelong, chemical imbalance. And there are other times that medication can ameliorate the impact of depression, addressing (for example) our need for rest.

But some causes of depression can only be addressed by facing them. From a spiritual point of view that involves the painful process of sitting with our grief in God's presence. And for that, there is no medication. 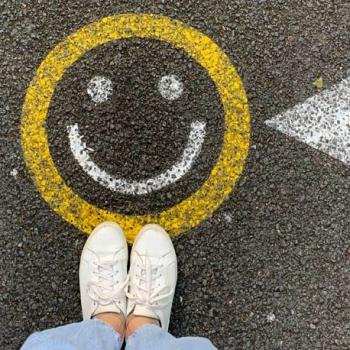 Why Do You Want to Be Happy?
Randy Alcorn
2

For Those Who Hurt On This Miserable Feast
Mary Pezzulo
3