Pray, Prepare, Practice: How I Put Together My Homilies

January 30, 2012 by Greg Kandra
"Like" the Patheos Catholic Page on Facebook to receive today's best commentary on Catholic issues. 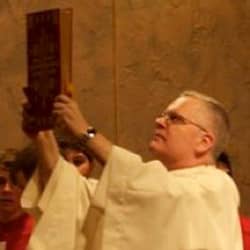 The question caught me a little off-guard, and I hadn't really thought about it until a lector brought it up in the sacristy one Sunday after Mass. "I'm curious," she asked me, as she slipped her missal back onto the shelf, "how long does it take you to write your homilies?"

I was hanging up my alb and I had to stop and think about it.

"I don't know," I said. "I guess it varies. Probably four or five hours a week is average. Sometimes more, sometimes less."

She didn't seem fazed one way or another and just nodded.

But it got me to thinking: what does it mean to write a homily? It's more than stringing words together and it's more than finishing an assignment or meeting a deadline.

It is a process—at times a subconscious one—and some weeks are easier than others. But in a nutshell, I think, it boils down to what I've come to call "The Three P's": Prayer, Preparation, and Practice.

Prayer. Most weeks, I'll begin work on a Sunday homily the week before it's to be delivered. Usually on Sunday night, I'll crack open the missal (or at my computer, click on the USCCB link to the readings online) and spend several minutes poring over all three readings for the following Sunday. I won't delve too deeply. It's a first read, to familiarize myself with what's coming up, and orient myself. I'll also try to read ahead a few weeks, to put the Gospel in context; if there are a series of parables or episodes that seem related, I'll try to discern a theme. (Reading ahead will also help me avoid a mistake I've made a time or two: unpacking the Gospel with a particular anecdote or theme, only to realize that it would have been better to use that story to illustrate a point the following week. D'oh!)

After I've absorbed a first read-through of the Gospel, I like to put it aside and meditate on it for a bit. Where do I see myself in the story? What is it saying to me? And as the week goes on, I'll revisit it every day, usually in the morning, where the Scripture often becomes my Lectio Divina on the subway. As the days go on, I'll find myself "praying over" the Scriptures and asking myself, "What is really being said here? How does this relate to what is happening in my life or what is happening in the news?" I'll keep my eyes, ears, and heart open to stories that might help to tease out some truth from the Gospel, and make it relevant. I revisit the Scripture every morning in this way; as time goes on, I can sometimes be surprised at phrases, words, or images that become stronger and begin to leave a deeper impression. My thoughts about the Scriptures on Friday will often be different from what they were on Monday.

Preparation. After I come up with an idea on how I want to break open the Scripture in my homily, I'll usually do a little digging to see what others are saying about it. William Barclay's studies on Scripture are a favorite resource, and very accessible, and the Jerome Biblical Commentary is also a great tool. I get a lot from the essays by Barbara Reid in America, as well, and I will sometimes go Googling to see what others have to say on particular Scripture passages or parables. I try to avoid reading other people's homilies, because I worry that it will leave me feeling frustrated and depressed and utterly inadequate. (Like a lot of clergy, I suffer from the malady known as Preaching Envy.)

Once I settle on a basic idea and approach, next comes the hard part: actually writing it. I usually try to tackle a first draft on Thursday night.

Different people employ different methods for preaching. Some people use notes. Others work from an outline. Some just wing it. But I'm a writer, and I just have to put the words on the page. Sometimes I'll sketch out a brief outline. But usually I'll just sit down, click on the computer, and start pounding away.

I can hammer out a decent first draft in a little over an hour, maybe 90 minutes. I have a hard time with endings, and will sometimes write only about 75 percent of the text on Thursday, and leave the rest for Friday (hoping and praying I get a good ending by then.)

If I finish the draft Friday night, I'll let it cool off and then look at it with a fresh eye on Saturday morning. Then comes the tweaking and trimming, finessing and fussing. I sometimes cut and paste and move things around for the sake of clarity. One technique I use often is "bookending": beginning a homily with an anecdote and returning to that story at the end, to close it off and make a final point. This is helpful for a couple of reasons: it gives an interesting opening to the homily, and then it signals to the listener that I'm wrapping things up (in other words: wake up, guys, I'm almost finished).