The prevalence of what could be seen as female allusions in Scripture's depiction of the Spirit led some early Christians to refer to the Holy Spirit in explicitly female language. Consider this one: "By baptism we receive the Spirit of Christ, and at that moment when the priests invoke the Spirit, she opens the heavens and descends and hovers over the waters, and those who are baptized put her on" (Aphrahat's Demonstration 6:14). Several medieval theologians were rather creative with gender distinctions in the Godhead, certainly allowing for a female dimension in God. But while some early Christians were happy to speak of the Spirit as "she," the Spirit is conveniently neglected in these discussions of "God and masculinity." As Elizabeth Johnson pointed out in She Who Is, the marginalization of the Spirit in the church corresponds to the marginalization of women in the church.

So, if one wants to speak in terms of "masculine" and "feminine" traits in Scripture and in God, one should do so hesitantly. Our talk about God must always take into account the mystery of God and the anthropomorphic nature of theological language—yes, even Scripture's inspired language. To the degree that the terms "masculine" and "feminine" are helpful distinctions, the two hands of God in Jesus and the Spirit ought to inspire gender inclusivity and equality. We should not make a habit of saying that God is, in any literal sense, either male or female.

In any case, if one wants to insist that Jesus was "masculine," remember that Jesus redefines what it means to be a human, and therefore what it means to be male and female. We dare not define Jesus' "masculinity" in the image of our culture's ideals. Furthermore, if Jesus is "masculine," then let's agree that the Spirit is "feminine." We, male and female together, are created in the image of the Triune God; God is not created in our image.

God has not given us Christianity with a masculine feel. Rather, Christianity has created a God with a masculine feel, to the extent we have forgotten that (1) God is not literally gendered (except in the incarnation) and (2) The Spirit and the Son—the two hands of God—suggest an inclusiveness that affirms the diversity in human creation and values equally, not just both sexes, but all configurations and combinations, in individual persons, of what society has traditionally called "feminine" and "masculine." 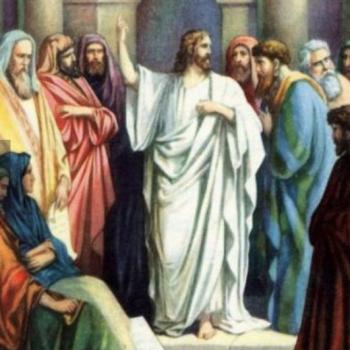 Walter Moberly's The God of the Old Testament-- Part Five
Ben Witherington
Get Patheos Newsletters
Get the latest from Patheos by signing up for our newsletters. Try our 3 most popular, or select from our huge collection of unique and thought-provoking newsletters.
From time to time you will also receive Special Offers from our partners that help us make this content free for you. You can opt out of these offers at any time.
see our full list of newsletters
Editor's picks See all columnists